A Most Extraordinary Pursuit by Juliana Gray 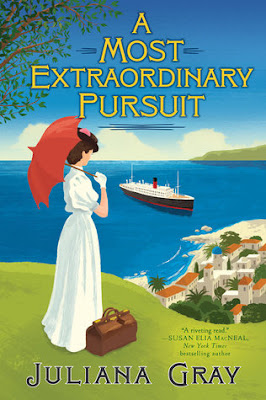 Emmeline Truelove was the personal secretary to the Duke of Olympia, till his recent death. Now, a young man by the name of Maximillian Haywood has inherited the duchy. But, he has gone missing. At the behest of the newly widowed duchess, and with the charming and dashing Lord Silverton accompanying her, Miss Truelove must head for the Mediterranean to unravel the mystery of the future duke's disappearance.

A Most Extraordinary Pursuit contains a wild, almost bizarre blend of adventure, mystery, characters who may or may not be entirely what they seem, potential for romance, ghosts, time travel, magic, and some very informative history paired with mythology.

The vast majority of the book follows Truelove and Silverton as they pursue clues to Haywood's whereabouts. Somewhere along the way, they pick up another man, a gentleman and scholar by the name of Mr. Higganbotham. Silverton is a gorgeous spy and a cad, Higganbotham an, at times, slightly daffy intellectual. After finding a fresco that appears to be fake in the palace of Knossos, which is being dug up and preserved, and repeatedly facing danger, the myth of Ariadne takes on a deeper meaning. But, what does the myth have to do with the missing duke? And, will either of the men pursue an understanding with Truelove or are they toying with her?

Recommended with postscript - I was absolutely immersed in A Most Extraordinary Pursuit, all week. It's only about 430 pages long (technically, that meets my old definition of "chunkster" from the days when I came up with the Chunkster Challenge, but it's not far over the line) but there's so much happening that it took me a long time to get through the book. I love the fact that A Most Extraordinary Pursuit has interesting characters but is plot-heavy. I love the Edwardian time period and the language. I really love-hated Lord Silverton. I pictured him with the face and hair of Luke Norris (Dr. Enys in Poldark) but with a wicked twinkle in his eye, Edwardian clothing, and a bit of a swagger. 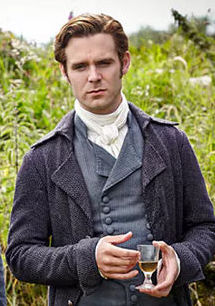 There were portions, however, that didn't work for me. There are two ghosts: the ghost of Queen Victoria and Truelove's father. Both visit Miss Truelove but it's Queen Victoria who tries to guide Emmeline and the ghost of her father contributes little. There are two men who may have romantic interest in Truelove, but one is known for enticing and abandoning women. The other is a either an enigma or exactly what he seems. Higganbotham almost completely fades away within the last 100 pages; he's there, but he's no longer key. Are we to distrust Higganbotham or simply dismiss him? Has his interest waned for good or will he appear in the next book? Because, herein lies another issue. A Most Extraordinary Pursuit is not a stand-alone. Although it's mostly wrapped up, at least one bright red thread is left dangling; clearly the story will continue.

Also, toward the end of the book, the mythology became extremely confusing. I thought the author did a fairly good job of interspersing bits of the tale of Ariadne and Theseus between chapters and explaining the characters (I'm not knowledgeable about mythology) till that last 50 pages or so. Then, it became suddenly overwhelming, to the point that I began to skim over the mythological portion. I didn't mind the craziness -- there is even a paranormal aspect, a magical touch -- but the author nicely warned her readers that she'd asked permission to take the book to extremes and it was granted. Well, she certainly did that. The book is wildly adventurous but it's also rather strange.

In the end, I gave the book 4 stars and I would, in fact, like to see where Juliana Gray (more commonly known as Beatriz Williams) takes Miss Truelove in future installments, but I also felt a slight bit let down and perplexed after the last 30-50 pages. And clearly I need to bone up on mythology.

There was also one particular feature of the book that I believe could have been minimized, if not left out entirely, and that was Truelove's repetitive seasickness. It was neither important to the plot, nor necessary for character development at any time, in my humble opinion, although perhaps it was meant to show us that Silverton could display compassion and kindness. I would have preferred that the author minimize those scenes; they were not fun to read at all.


©2016 Nancy Horner. All rights reserved. If you are reading this post at a site other than Bookfoolery  or its RSS feed, you are reading a stolen feed. Email bookfoolery@gmail.com for written permission to reproduce text or photos.
Posted by Bookfool at 3:08 PM

Email ThisBlogThis!Share to TwitterShare to FacebookShare to Pinterest
Labels: a touch of mystery, a touch of romance, adventure, first in a series, Juliana Gray, mythology, paranormal elements, recommended with a special note, series