I don't want to stop forward momentum, here, so there will be a cat photo at the end of this post to fulfill your Friday cat requirements but I want to go ahead and get a book post finished (and, hopefully, I'll get a couple book reviews written over the weekend). Links to the few reviews I've written are provided, where applicable. 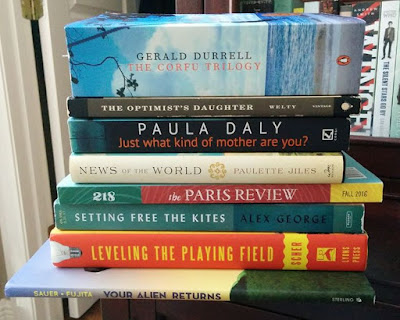 93. Just What Kind of Mother Are You? by Paula Daly - When 13-year-old Lucinda disappears, the mother of her best friend feels responsible. The child was supposed to have been spending the night at her house, after all. Lucinda is not the first child to disappear; a rapist is on the loose. Will Lucinda be found in time to save her or is it too late? The pages flew and the suspense was excellent, although I did unravel a couple plot points before they were revealed. The author occasionally wrote from the POV of the rapist and those bits were extremely disturbing.

94. The Optimist's Daughter by Eudora Welty - My classic choice of the month, the story of a woman dealing with the death of her beloved father, a selfish and emotional second wife, and the conflicting emotions that come with grief. I particularly thought the scenes that took place with neighbors and friends were a bang-on viewpoint of life in the Deep South.

95. The Paris Review, Issue 218 - The only thing I read, this month, that deserved less than 4 stars. I bought this issue of The Paris Review for the change of pace and I enjoyed some of it, particularly the short story by Ann Beattie and some of the poetry. But, at least one poem was utterly baffling and both of the interviews were, frankly, dull as paste. I ended up skipping most of the second interview. Notably, this issue got terrible reviews at Goodreads. So, it wasn't just me.

96. News of the World by Paulette Jiles - Captain Kidd makes his living reading newspaper articles aloud to audiences in post-Civil War Texas. Young Johanna lived with Kiowa Indians after her family was killed and no longer understands the ways of white people. When Kidd is offered a fifty dollar gold piece to deliver Johanna to her relatives in San Antonio, he's in for more adventures than he anticipated. Absolutely marvelous storytelling.

97. Your Alien Returns by Tammy Sauer and Goro Fujita - The follow-up to Your Alien, this children's picture book brings the alien back to Earth, where he invites his human friend for a visit to his own planet. The rest of the book is a rollicking adventure on another planet. Loads more fun with the cutest alien, ever.

98. Leveling the Playing Field: The Democratization of Technology by Rod Scher - Starting with the invention of fire, the author describes various inventions and how they have gone from being expensive or otherwise difficult to acquire to common and affordable (or democratized). Much more fascinating than expected, very readable, and the author has a terrific sense of humor.

99. Setting Free the Kites by Alex George - The story of a friendship between two middle school boys in Maine and the experiences that bond them, for better or worse. Utterly captivating.

100. My Family and Other Animals by Gerald Durrell - The first in a trilogy of books about young Gerry Durrell's family and their time living in Corfu. I bought the trilogy because I was enjoying the PBS series, The Durrells in Corfu, not realizing that My Family and Other Animals was considered a classic. A friend said it was required reading during his schooling in Derby, England. Definitely the kind of book that should be required - exceptionally well-written, humorous, an entertaining learning experience. If American kids read more books like this and fewer of the depressing variety, I'm certain our schools would spawn more readers.

Only 8 books read but I considered November a fantastic reading month because the quality of the books I read was high. Favorites were News of the World, Your Alien Returns, Setting Free the Kites, and My Family and Other Animals. I liked all of the rest of my reading. The only exception was The Paris Review, which did contain some good reading material (and I enjoyed the paintings) but overall was subpar.

Incidentally, the bookmark barely visible in My Family and Other Animals shows where that first book in the trilogy ends and the next book begins.

And, now, for something completely feline: 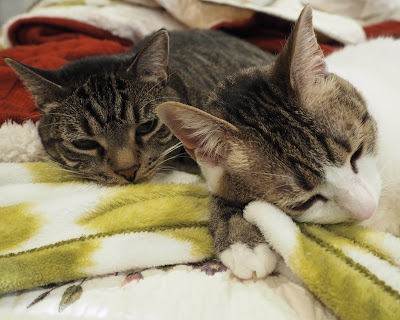 Cuddle Season has opened! Fiona and Isabel have been snuggling for a couple weeks, now. Always my favorite time of year.

©2016 Nancy Horner. All rights reserved. If you are reading this post at a site other than Bookfoolery  or its RSS feed, you are reading a stolen feed. Email bookfoolery@gmail.com for written permission to reproduce text or photos.
Posted by Bookfool at 5:05 PM

Email ThisBlogThis!Share to TwitterShare to FacebookShare to Pinterest
Labels: Fiona Friday, One Month's Reads in Brief