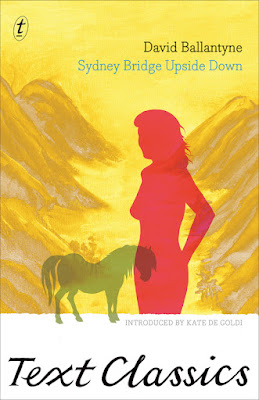 There was an old man who lived on the edge of the world and he had a horse called Sydney Bridge Upside Down. He was a scar-faced old man and his horse was a slow-moving bag of bones, and I start with this man and his horse because they were there for all the terrible happenings up the coast that summer, always somewhere around.

So begins Sydney Bridge Upside Down, a New Zealand classic. When the book opens, there are two boys playing near a cliff. Neighbors in a tiny hamlet that used to be a bustling village, the boys argue and then wrestle and one goes over the cliff. You don't find out for quite a while that the one who went off the cliff was uninjured. Now and then, he'll bring it up and nobody is particularly interested. That is a vague hint at the oddities to come.

It's summer and the boys are out of school. Robert, the narrator and one of the boys, spends much of his time doing chores for his one-legged father, playing with his brother and best friend. They climb on the remains of a former slaughterhouse, play on the shore and in a nearby cave, and run around the house naked. Sometimes, Robert thinks about his absent mother and the teacher, both of whom have gone into the city. When an older female cousin comes for a visit, the boys are dazzled by her beauty and puzzled by her behavior. Robert feels like he must protect her from the older men who show interest in her.

Sydney Bridge Upside Down seems very much like a "boys being boys" type of book, a snapshot of one summer in their lives, at first. But, then the first death occurs and the book takes a sinister turn. You know who saw the person alive, last, but was the death an accident? If not, it's clear who is responsible. And, then there's a second death under similar circumstances. This time, a strange dream-like sequence bleeds with guilt.

Recommended - Sydney Bridge Upside Down is very dark. What at first appears to be the story of three innocent young boys having fun takes an odd turn when the beautiful cousin shows up and becomes ominous when the first person dies. From there on, it becomes a bit of a horror, but one so carefully crafted that you aren't entirely certain if your suspicions are true. In the end, all is revealed. While I'm not a huge fan of novels that fall on the darker end of the spectrum, it was obvious why Sydney Bridge Upside Down is a classic, from the beginning. There's an authenticity to the writing that is impressive. Truly a fascinating tale. I love the author's miminalist style; he does an exceptional job of telling you just enough to keep the story intriguing.

©2016 Nancy Horner. All rights reserved. If you are reading this post at a site other than Bookfoolery  or its RSS feed, you are reading a stolen feed. Email bookfoolery@gmail.com for written permission to reproduce text or photos.
Posted by Bookfool at 4:02 PM