A Duke Changes Everything by Christy Carlyle (The Duke's Den #1) 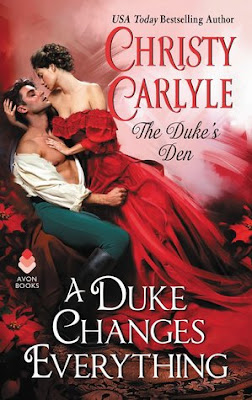 When Nicholas Lyon's father rejected him, he did so in an extraordinarily painful way. Now, years later, Nick is the owner of a successful gambling establishment and happy to strip the wealthy of their holdings when they lose at his tables. But, then disaster strikes. His brother is killed in an accident and Nick inherits his family's ducal holdings. Nick has never planned to return to his childhood home; it only holds terrible memories for him. But, as the Duke of Tremayne, Nick is responsible for his family's estate, Enderley Castle, the home he and his mother escaped many years ago.

When Nick arrives at Enderley, he intends to only remain at the castle long enough to sell off many of the valuables in preparation for leasing it out while he returns to his London home. He's not expecting to find that the steward of the estate is a trouser-wearing woman with a similar need for order. As he gets to know his steward, Mina Thorne, Nick is surprised to find himself dragging his feet and even enjoying his ability to improve the lives of his tenants. But, Nick was traumatized by his father's abuse. Will he be able to overcome the pain of his past?

Recommended to a specific audience - I read A Duke Changes Everything for the change of pace (thanks to a slumpy couple of months) and I was not disappointed. I thought it was surprising how quickly the duke softened, but the author managed to characterize him as a man with a softening heart and yet still retain the challenge of dealing with his childhood trauma while he was slowly falling in love with his steward. And, there were plenty of little surprises. There was one scene in particular that I felt was more authentic to what I'd expect of the time period than what you often find in historical romance. There were a couple historical anachronisms, but that scene helped to balance things out a bit and, anyway, I just enjoyed the reading. Mina is a likable character and the way Nick's heart is softened by doing good makes sense to me. And, the ending is incredibly satisfying.

©2018 Nancy Horner. All rights reserved. If you are reading this post at a site other than Bookfoolery or its RSS feed, you are reading a stolen feed. Email bookfoolery@gmail.com for written permission to reproduce text or photos.
Posted by Bookfool at 1:22 PM

Email ThisBlogThis!Share to TwitterShare to FacebookShare to Pinterest
Labels: Avon Books (an imprint of HarperCollins), Christy Carlyle, first in a series, historical fiction, recommended to a specific audience, romance