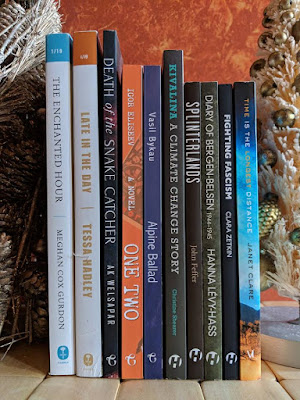 
It's probably worth mentioning that accepting a book from an author is a no-no according to my own review policy but I'd forgotten that until the author reminded me by mentioning that she found my review policy entertaining (I had to go back and see what I'd written, it's been so long since I updated it). Well . . . one exception due to forgetfulness is okay.

The replacement book that I mentioned above is one I've already reviewed: Death of a Snakecatcher. When I wrote about the binding problem that was causing pages to fall out out of Glagoslav books, my contact took it very seriously and got in touch with the printer. After the binding issue had been fixed, she offered replacements of the books I've been sent in 2018 and I only accepted the one because I'd like to keep that particular title for rereading.

The Haymarket Books I bought on sale. I've been interested in Haymarket titles for a while but hadn't taken the plunge. At 50% off, though, I decided the time had come. Splinterlands is the only fiction title of the four I bought.


The latter of the two is a children's book that my youngest son bought for our eldest granddaughter and will be sending her for Christmas (I think -- he actually got her two books, so I'm not sure which one he'll send). I couldn't resist reading it before it goes out the door.


Friday Black is a knock-your-socks-off collection. I'm so impressed. I just started The Huntress, last night, and I didn't get very far so I considered not mentioning it but I enjoyed what little I read and think it's likely that it'll take, so to speak. I hope so. It might be responsible for the "chased by an assassin who is slowly killing off all your fellow spies" dream I had. That was an interesting dream.

We've been spending most of our free time tidying, wrapping, decorating (with the goal of going slowly overboard like they do in Hallmark movies) but we've had a little time to sit down and watch TV. We enjoyed the finale of Dr. Who, watched Sahara for the umpteenth time, and I caught a couple Hallmark movies. I liked one of them so much that I watched it twice: A Christmas Detour. I've found that I like all of the movies that star Candace Cameron Bure but this is the first one I've liked enough to watch it all over again. I think I'm all done with Christmas shopping but I need to do a mental checklist, one last time, to make sure. At the very least, I got the one bit of shipping I needed to do out of the way, so that's exciting. In recent years, we've usually been so late to ship things that sometimes they haven't arrived until after Christmas. Getting that out the door in plenty of time was a very good feeling.


©2018 Nancy Horner. All rights reserved. If you are reading this post at a site other than Bookfoolery or its RSS feed, you are reading a stolen feed. Email bookfoolery@gmail.com for written permission to reproduce text or photos.
Posted by Bookfool at 1:41 PM