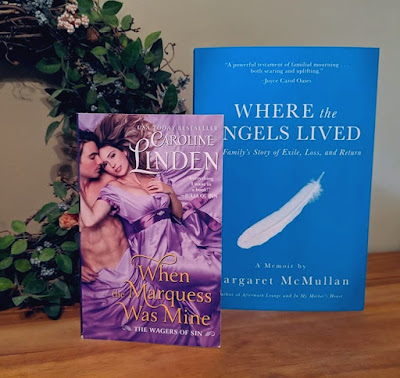 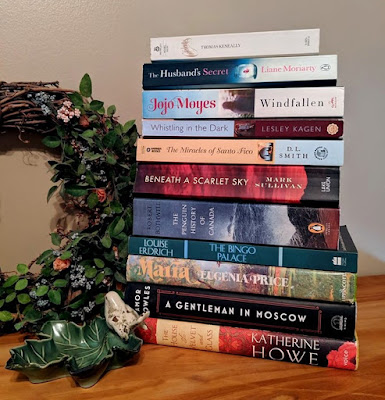 
I added the props to fight the ugly because the brown wall made a much duller background than expected.


I still consider myself on a book-buying ban, believe it or not. All of these were library sale purchases. I decided it's OK to bring home a pile if I don't spend too much money on them and provided other books are going out the door (I really do have too many books). At $3.50 for the entire pile, I felt like that stack was fine for the budget. Group discussion books are a no-purchase exception, also. If I plan to be there, I'll buy the book.


Obviously, not my best reading week. I've had blurry vision (probably from sleep deprivation — I had a lot of weird nightmares that woke me up, last week) so I didn't read much. Things are still blurry, but I'm going to try to finish my current read by tonight.


I've wanted to read The House on Tradd Street for years, but it was the combination of the RIP Challenge and a new Tradd Street publication that got me to finally pick it up. I'm enjoying it. I've found it much more frightening than Joe Hill's Heart-Shaped Box. The heroine is a bit prickly for my taste, but I'm holding out hope that she'll soften up a bit.


Fiona Friday on the Wrong Day was posted late because my mouse was dying and only worked off and on for about 2 or 3 days before we finally managed to buy a new one. What a relief to have a mouse that doesn't freeze up!!!

I can't believe I did this: I've been anxiously awaiting the first episode of Chicago Fire and what did I do? Oops, didn't even turn the TV on, that night. I'm going to see if I can find it at the network's website.

I started watching Glitch, last week. I think I'm on Episode 4. In case you haven't seen it, Glitch is an Australian program in which people return from the dead. One of them is the local police officer's deceased wife. What surprised me about this show is that it's not a zombie show at all. It's more like a resurrection. The people who return are intact; there's nothing revolting about them. They have flashes of memory about their lives and how they died, eventually, but at this point only one of them thinks she knows why they've been brought back.

What I love about Glitch is the way they handled it. The police officer, not knowing why a bunch of naked people covered with dirt are wandering around the cemetery, calls for medical help, wraps them in blankets, and takes them back to the clinic. He acts like a normal person, in other words, not leaping to any conclusions about where they came from or how a group of people ended up in their condition. I'm a little afraid of Episode 4, to be honest. Vic (a second police officer from a different area, nearby, who found the first officer's behavior suspicious) was acting very odd in Episode 3 and I'm afraid he's going to hurt someone.  The first image of the DVD case is from American Amazon. The second is the image that pops up most frequently in a search and I'm guessing it's the Australian version.


There doesn't seem to be any image at all for The Royal, Season 6, but BritBox has just added 3 more seasons to their site. I've only watched one episode and probably won't watch it as often as I have been because I'm in the mood for something different (hence Glitch), but it was a very interesting episode, showing Dr. Jeff Goodwin in Biafra, where he had to dodge bombs and gunfire.

©2019 Nancy Horner. All rights reserved. If you are reading this post at a site other than Bookfoolery or its RSS feed, you are reading a stolen feed. Email bookfoolery@gmail.com for written permission to reproduce text or photos.
Posted by Bookfool at 12:25 PM