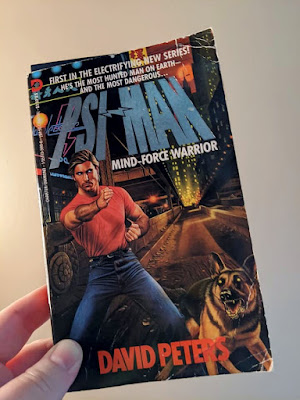 I might have skipped reviewing this book completely if a friend hadn't asked me to review it (Hi, Tasha!). The first in a series of books about a man with psychic telekinetic powers, Psi-Man: Mind-Force Warrior is a book I plucked out of a box of my son's books when we were cleaning and rearranging the contents of our guest room closet, a couple weeks ago. Published in 1990, the book takes place in what was then a world 30 years in the future . . . 2020! OK, 2021, also.

Psi-Man's name is Chuck Simon and he's a coach and gym teacher working in a high school. When a student he's known to be reliably present and dutiful doesn't show up for class, Chuck is concerned. And, when he finds the student looking drugged while talking to a shifty stranger, he suspects something dangerous is happening and intervenes. What Chuck doesn't know is that a shadowy government agency has heard of his natural ability. They want to train him to use his special talent to kill. But, first they need to test him to see if he's as powerful as they think he is.

After things go horribly wrong, Chuck agrees to go with the men who claim they'll teach him to control his powers. But, when Chuck finds out the truth, will he be able to escape the well-guarded compound in which he and his new friend (a German Shepherd with whom he can communicate telepathically) have been housed?

All of this is told as a flashback after a scene that takes place in 2021. So, it's basically all set-up for the series, which at least continued for 5 more books. Kiddo owns 5 including the first (one is missing) and I suspect we got the first one at a secondhand book shop because I remember how difficult it was to track down the others at a reasonable price.

What Tasha wanted to know was how close did the author come to predicting what happens in 2020? I mentioned that he was somewhat prescient in some ways and laughably off-base in others. For example, someone rewinds a tape on page 90 of Psi-Man: Mind-Force Warrior:

He sat back, steepling his fingers, and watched intently as Jeffries rewound the tape and started it over again.

But, payment has gone fully digital. Here's a quote I marked because I found it fascinating:

He sorted through other books, including out-of-date texts on currency. Now there had been another superb idea. Once the ID nature of the Cards had worked out so well, hard money had fallen into such disuse that it was practically obsolete. Everyone had accounts tied in to their cards, and salaries were paid directly into those accounts. Every purchase was deducted from the accounts, as were charges for such services as phone, electricity, and ash removal.

So, you can see the author came close. While there's no standard ID card that absolutely everyone owns (this takes place in the US), obviously we have direct deposit and services that are set to make automatic deductions. He didn't anticipate the Internet but did think to imagine that cash would be used less. The "ash removal" bit has to do with the dystopian aspect of 2020 in this fictional world, a world so polluted that the sun almost never breaks through the smoky haze that hangs everywhere.

Also, this is hilarious if you recall Dan Quayle:

Standing nearby was Quint. His arms were folded, and he was leaning against the base of a statue of former President Quayle.

And, there's this one moment that will make the people watching for a plague within its pages chuckle:

The sun glinted off the highly polished buildings, bathing them in a corona of light.

OK, that's as close as you get to coronavirus. Nope, he didn't predict a pandemic. But, it was funny to see the word "corona" because that obviously is a trigger word at the moment.

Highly recommended to people who like pulp-fictiony action novels - Let's face it, this is not stellar writing and it's not meant to be. It's pure, over-the-top fun with an action hero who has powers in sort of an X-Men vein but without any team of buddies with similar powers, just his faithful, telepathic dog. The dog has some amazing powers, too.

I don't know if I'll read more of the Psi-Man series but it made for a really nice mental break read. I like to step outside my comfort zone and throw in something I wouldn't normally read, now and then, just for a change of pace. It really lifted my spirits in an unexpected way. I think that was mostly because it's just a fun, action read that's not taxing but also because I enjoyed seeing how someone visualized 2020 when it was decades in his future. It was quite fun noting the differences between David Peters' imaginary world and our real one.
©2020 Nancy Horner. All rights reserved. If you are reading this post at a site other than Bookfoolery or its RSS feed, you are reading a stolen feed. Email bookfoolery@gmail.com for written permission to reproduce text or photos.
Posted by Bookfool at 11:51 AM