The Paris Hours by Alex George 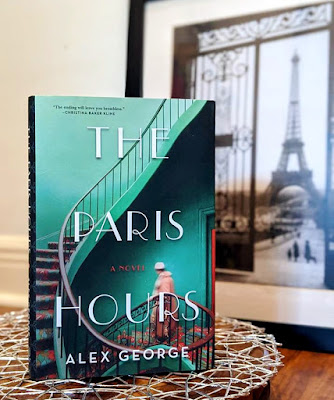 Jean-Paul loved his wife most when she was singing. It was the ravishing vigor with which she performed that laid siege to his heart. Music coursed through her, a joyous river. It illuminated her from within, filling her with the light of a thousand suns. When there was a tune on her lips, his wife was always the most beautiful person in the room.

In The Paris Hours by Alex George an Armenian genocide survivor, a struggling artist, Marcel Proust's maid, and a journalist all converge in the same location on a night in 1927. Who are they and how did they all end up in the same place? What will be revealed when an important notebook is sold, its secrets bound to cause damage?

Oh, my. There is so much to say about The Paris Hours. First and foremost, I think it would make an excellent discussion book and I've already told the host of my book club that we need to discuss it, some time. We read A Good American back when it came out in paperback and that discussion was quite a lively one, so she is definitely interested (but I have to wait for it to come out in paperback because that's one of the group rules). It's the kind of book you want to reread once you've been through it a first time, so I'm already looking forward to that eventuality.

But, back to the story. The main storyline takes place within a single day in 1927. But, as each character's story unfolds, the reader is taken back in time to fill in the gaps. How did an Armenian survive the genocide and end up working as a puppeteer in Paris? What is in the notebook that belongs to Marcel Proust's former maid and how did she end up with it? What will happen to the artist when his time to pay a debt to a notorious loan shark runs out? And, how does the journalist help tie these people together?

Because so many American artists, writers, and musicians lived the ex-pat life in Paris during the 1920s, there are appearances by Ernest Hemingway, Gertrude Stein, Josephine Baker, and the owner of Shakespeare and Company, Sylvia Beach, among others. But, they're background characters who give color to the time period in Paris rather than main characters. I think that may be part of the reason I felt like they were more believable than a lot of real-life historical characters fictionalized in novels, but it also is undoubtedly down to the skill of the author.

The only thing I disliked about this book? I found the ending a bit abrupt. But, only briefly. After I'd let it roll around in my head for a time, I realized that if the author had taken that final scene one step further it would have entered entirely different territory as what's about to happen in the end is both an ending and a beginning, if that makes sense. Well, just read it and you'll see.

Highly recommended - Exquisite writing in a beautifully drawn tale that brings four seemingly disparate lives together for an evening of drama and tragedy followed by hope. Personal opinion: The Paris Hours is a five-star read. I chose the quote above at random because I didn't mark anything while I was reading (too engrossed to look for the flags) and it was just serendipity that it happened to be a quote about music. There is always music in Alex George's books and he has a particular talent for describing it, probably because he's a musician and music lover, himself. I couldn't help but smile when I randomly opened the book to that paragraph.