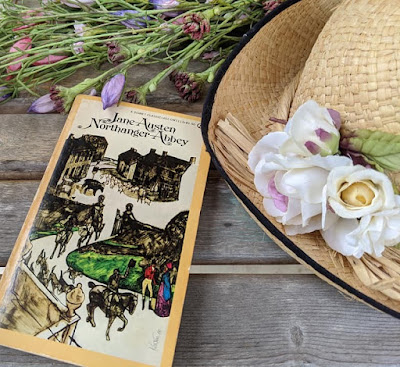 Quick thoughts only. Northanger Abbey is probably the last book by Jane Austen that I'll read and that puts me at 5/6 of her novels, plus the unfinished Sanditon (the version finished by Kate Riordan), Lady Susan, and her juvenilia. The only book I couldn't get through is Mansfield Park. I hated the book and I hated the movie so much that I abandoned both so I doubt I'll ever get to that one, but who knows?

The writing in Northanger Abbey reads a little less mature than that of Pride & Prejudice and other works so, without looking up the publication date, I'm presuming it's an earlier work. I have no idea, though.

Catherine is invited to Bath by a neighbor. There, she meets and falls for a man named Henry Tilney while also becoming friends with a couple young ladies, one of whom is obviously attracted to Catherine's brother, James. When she's later invited to the Tilney home, Northanger Abbey, to stay with Henry's sister, Catherine is made nervous by a story Henry tells her (the Gothic elements of the novel) and she keeps getting caught opening doors and drawers that she shouldn't because her vivid imagination has her conjuring up all sorts of frightening possibilities. Northanger Abbey is really quite funny and a little nerve wracking. I enjoyed it immensely. Recommended.


©2020 Nancy Horner. All rights reserved. If you are reading this post at a site other than Bookfoolery or its RSS feed, you are reading a stolen feed. Email bookfoolery@gmail.com for written permission to reproduce text or photos.
Posted by Bookfool at 2:00 PM