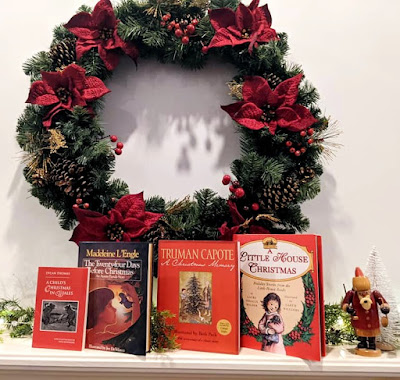 All of the books shown above are rereads and I have a feeling I've mentioned a couple of them in the past, so just some quickie thoughts about each:
A Child's Christmas in Wales by Dylan Thomas is one of my favorite Christmas reads. I only discovered it a few years ago, when I was asked to make suggestions for short reads to discuss at my F2F group's Christmas meeting, and I've read it 3 times, since.

Our snow was not only shaken from whitewash buckets down the sky, it came shaking out of the ground and swam and drifted out of the arms and hands and bodies of the trees; snow grew overnight on the roofs of the houses like a pure and grandfather moss, minutely white-ivied the walls and settled on the postman, opening the gate, like a dumb, numb thunderstorm of white, torn Christmas cards.

Oh, how I love A Child's Christmas in Wales. Absolutely captivating, humorous, and a pure delight. Dylan Thomas' use of language blows me away. The "fish-freezing waves" and "the gong was bombilating". I'm going to make reading it an annual tradition, along with . . .
A Christmas Memory by Truman Capote, a timeless, beautiful story of an unusual friendship between cousins with decades between their ages but a tender relationship. They're impoverished but rich with the ability to find Christmas joy together. A Christmas Memory is such a lovely, meaningful book about the simple joys of Christmas.
Isabel helped me out with another of my reads (mostly by sleeping next to me), A Little House Christmas: Holiday Stories from the Little House Books by Laura Ingalls Wilder. Wilder did such a wonderful job of describing where the family was living in each story and that particular year's circumstances (blizzard, life in a dirt home that had no stove, living near a small town where she had an uppity rival) that there's never a sensation that these stories were pulled out of context. 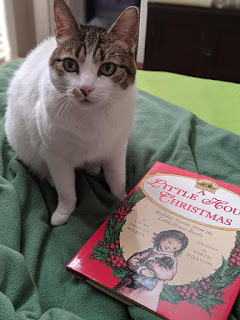 As in A Christmas Memory, the stories in A Little House Christmas are about simple joy. Laura and Mary even talk themselves into being fine with no gifts at all when Pa needs a new horse, one winter. I haven't read A Little House Christmas in many years but I loved it so much that it made me want to go back and read the entire series. I don't think I ever actually read all of the Little House books, as a child, but I remember those I did read with affection.

The only book from this batch that I didn't love was The Twenty-Four Days Before Christmas by Madeleine L'Engle, which appears to be a Christmas story written as part of a series, the Austin Family Chronicles. I was unfamiliar with the characters and felt it a bit mediocre, even back when I bought it in the 90s. I'm pretty sure the only reason I kept it was the fact that I happened to be collecting books by Madeleine L'Engle, at the time. It's a nice enough story, just nothing brilliant.

Vicky is worried that her heavily pregnant mother won't be able to attend the Christmas pageant but when a blizzard blows in while her father's away from home and her mother goes into labor but can't leave the house, she realizes what's really important. The Twenty-Four Days Before Christmas is sweet and old-fashioned, a good reminder that a simple, traditional Christmas that's not all about the gifts is a lovely thing. But, it's mediocre enough that I'm going to part with my copy. 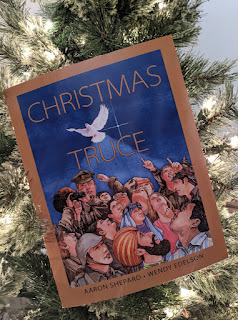 I also got one new-to-me book (originally published in 2005, if I recall correctly), The Christmas Truce by Aaron Shepard and Wendy Edelson, a children's illustrated retelling of the true WWI story of the cessation of hostilities between British and German troops at Christmas. The soldiers shared food and drink, sang songs from their respective countries, and enjoyed a brief reprieve from fighting. It's told as a fictional letter home from the front but based on the stories told by those who were present.

I thought The Christmas Truce was nicely written and the illustrations are fabulous. I'll probably forget to put it in the recent arrivals pile, next Monday, but I purchased it after looking for a different children's book about the Christmas Truce and finding that it's both out of print and out of my price range.

This will be my last post of the week. I'll be back on Monday.

Merry Christmas to all my book-loving friends!