How to Get Away with Myrtle by Elizabeth C. Bunce (Myrtle Hardcastle Mysteries, #2) 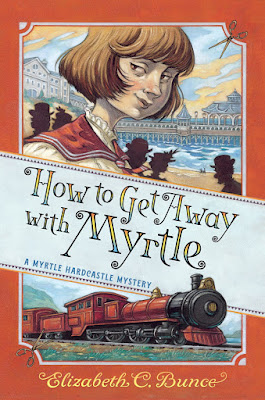 In this second installment of the middle grade Myrtle Hardcastle Mystery series, How to Get Away with Myrtle by Elizabeth C. Bunce, young Myrtle has been sent on a train trip to the shore for vacation. She'd rather be home, studying law and medicine, and solving murders. But, Myrtle's father is in Paris at a conference and she's sent packing with her governess, Miss Judson, and the formidable (and not a little intimidating) Aunt Helena. She also brings her cat, Peony, along. Peony is a tremendous character and no ordinary cat.
Things get off to an interesting start when Myrtle hears Mrs. Bloom, an insurance investigator, telling the owner of the train and the resort to which they're headed that his insurance policy on a valuable diamond and Alexandrite tiara will have to be cancelled if he doesn't follow the rules and put it in a safe, as specified. At that moment, it's in a display case for all to see. Then, it goes missing and Mrs. Bloom turns up dead with Aunt Helena's scissors in her back. Are the theft and murder connected? Is it possible that Aunt Helena's a murderer? What happened at the resort town that made Mrs. Bloom a friend to all?
Myrtle has a little trouble getting involved in the investigation but once it becomes apparent that the railroad inspector is less than competent because of his unwillingness to listen to female witnesses and then Aunt Helena is arrested for the murder, Miss Judson bends to Myrtle's will and they're on the job. They summon a friend to help with the legal aspect (a familiar character from the first in the series) and slowly unwind the mystery.
Highly recommended but I advise reading the series in order - It's the characters and the dialogue that make How to Get Away with Myrtle such a delight. The cast is fairly large and that's probably my only complaint but it's a minor one because they're all so well delineated that there's never any confusion from one character to the next. I simply found the cast size a little unwieldy and would have to think for a minute or two to remember previous encounters when they were reflected upon. At any rate, I like Myrtle and Miss Judson. I loved the way what appeared to be related threads were broken off into separate stories that were satisfying unto themselves. And, I really adore the young lawyer called in to help, who calls Myrtle "Stephen" for reasons I don't entirely recall, although I remembered him as soon as Myrtle described him. A very satisfying mystery with loads of charming scenes and a few edge-of-your-seat moments. Not to be reserved for middle school kids. Grown-ups need a little good fun, too.
My thanks to Algonquin Books for the review copy!