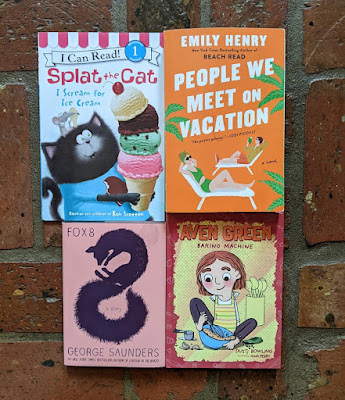 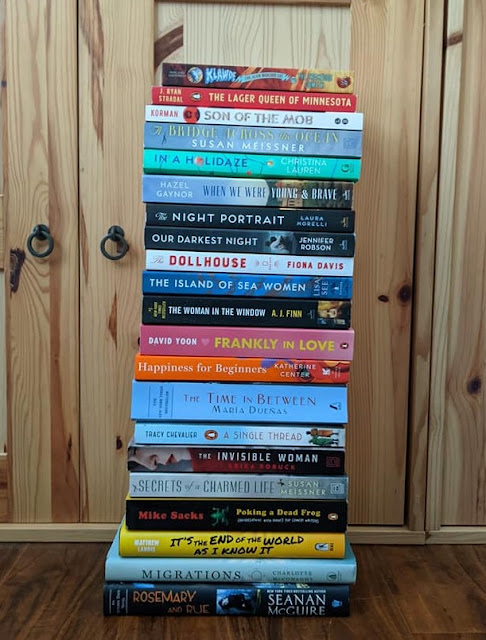 Recent arrivals (I did warn you a large pile was coming, right?):

The two purchased books are books I already read and forgot to add to the big stack, which . . . are you ready?
Bottom photo (top to bottom):
Holy Toledo, right? Well, I told myself that it was OK to not bother narrowing down the number of books I tossed in my cart because it was a one-time thing and I wouldn't be buying books (apart from those exceptions to my buying restrictions) for the rest of the year but then . . . I was wrong about that, actually. I have a second order coming, mostly the middle grade books I've been craving. But, I'm done! Really, I am. I'm back in book-buying jail.

This last two weeks were good reading weeks. Splat the Cat is just a little "I Can Read" book for children that I threw in the cart with the thought that it would be nice to have a couple of easy-to-read books for when my grandchildren visit (if they ever do) but I had to read it, obviously, and I enjoyed it. Fox 8 is another one that should have been in the big stack but which I'd already read and then forgot to put in the stack when I photographed it. Aven Green Baking Machine was another fun Aven Green book — she is such a great character. I've already pre-posted my review of Aven Green Baking Machine for release week. The Girl with the Louding Voice was my favorite of this batch but honestly, I really loved them all.

I dragged my feet on this but with less than a week to go, I messaged Simon Van Booy about his month-long writing workshop to ask if he had any openings left and he still had an open slot! It starts today and I'm both excited and terrified (because there's a requirement to read your work aloud). To prepare, I cleaned and tidied my office-slash-library and, in the process, I came across some of my old writings. I sat down and read an unfinished novel that I don't even remember writing and, huh, it's not bad. I need help plotting and developing characters but it had some good little pieces of intrigue in it, I thought, and I found myself thinking, "I have no idea where this is headed." Unfortunately, that was probably also true when I was writing it but I'm hoping that this class will help me figure out how to finish some of those story starts that stalled. This one's a wee bit old. I mentioned a character who got rid of her Jennifer Aniston hairdo and my MC still had a landline in addition to her cell, which made me chuckle.

I've also been busy taking more online painting courses (just watched a free one and need to go out and give the project a whirl) and I'm unsure if I'll be able to fit in the reading and painting I like to do regularly, plus blogging. I guess we'll see how intense the workshop turns out to be and I'll work from there. I like being just a little overwhelmed, but if the blog is a little quieter it's just going to be a temporary thing.

We are having some interesting kitty challenges. Isabel had to go to the vet for a claw that grew into her paw pad. There was hissing, spitting, howling, and . . . after the vet put a towel over her head to get the last claws trimmed without anyone dying a horrible slashing death . . . poor Izzy's bladder went. She was really terrified. On the plus side, she forgave me immediately and even held her paw up a couple of times in search of sympathy after she had stopped limping. She is so funny.

Fiona has lost weight and will have to return for tests. She's lost enough that the vet said, "It's not nothing" and it will have to be investigated. She's just as perky and happy as ever so I'm hoping it's something minor and, if not, something that can be medicated into submission for a few years. Please cross your fingers and toes for her.