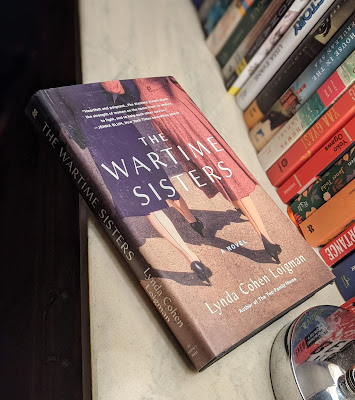 In The Wartime Sisters by Lynda Cohen Loigman, the author explores a difficult relationship between two sisters and the challenges of being a woman. It's really a sister book, in my humble opinion, not a WWII book, although the Armory in Springfield, Massachusetts makes an interesting historical setting and its role in WWII appears to have been important.

I'm not usually a fan of sister books because they tend to be gushy friendship stories. The Wartime Sisters is different and I like that because I prefer the conflict. Ruth and Millie are opposites in many ways. Ruth, the elder of the two, is envious of her pretty younger sister. She's very intelligent, good with numbers, but plain and narrow. Millie has curly red hair and is gorgeous and curvy but not the sharpest knife in the drawer. From an early age, their mother shows a clear preference for Millie, expecting her to marry well and making it far too clear to Ruth that her mother has neither a particular interest in her nor any great expectations for marriage. Being snubbed by one's own mother has harsh effects; Ruth becomes bitter and resentful.

Millie doesn't understand her sister's antipathy. She's blind to the fact that male attention is immediately shifted from Ruth to Millie when she's around and doesn't encourage men to act the way they do. She even tries to talk up her sister when marriageable men are around.

Eventually, both sisters marry and WWII arrives. Ruth is living at the Armory in Springfield when her sister says her husband has enlisted, gone missing, and then writes that "he's gone". Feeling guilty over something she did after their parents' accident, a few years back, Ruth invites Millie and her son to move in with her family. But, the old resentment is still there and they skirt around each other. Will Ruth and Millie ever learn to get along? Will Millie be able to pull herself out of poverty and make a life for herself and her son, Michael? What secrets are the sisters keeping from each other?

Recommended - While I picked up The Wartime Sisters because of the word "wartime" in the title, not the "sisters" aspect, I really enjoyed The Wartime Sisters for the fact that it felt more realistic to me than most sister books and I didn't mind the fact that the war is merely a backdrop, apart from the details of the Armory. I also liked the fact that the family is Jewish so you got a little bit of the father speaking what I assume is Yiddish, the holidays and food that are important and Judaism. I loved that peek into the Jewish culture.