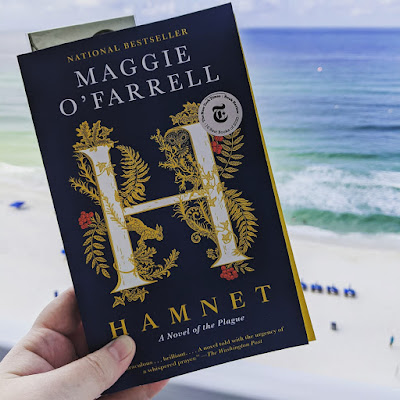 Hamnet by Maggie O'Farrell is about the death of Shakespeare's only son, mostly told through the eyes of his wife Agnes (a form of Anne) and the child. But, it's not just about Hamnet. The story alternates between Hamnet's final day and how Agnes and William Shakespeare met, fell in love, and married and theorizes about how Hamnet's death may have influenced Shakespeare's writing of Hamlet.

In Hamnet, Maggie O'Farrell has imagined an Agnes with a finely-tuned sixth sense and a skill for healing with herbs. Shakespeare himself has a lesser role. He is the love interest, the abused child, the unhappy young man, the absentee father. He has a desk where he writes feverishly when he can, but he's stuck working a job in which he's not suited, for a good portion of the book. When he finally is able to do what he chooses, he's mostly out of the picture.

I love Maggie O'Farrell's writing. Hamnet is melancholy of tone and the child's death is heartbreaking but the story is skillfully crafted and ends, fortunately, on an uplifting note.

I bought my copy of Hamnet because it was my F2F book group's June selection but it just happened to be the one book I most regretted not ordering before the end of the year and the beginning of my book-buying ban. So I was pleased to have an excuse to buy it! Unfortunately, the book group discussion was not great. Nobody seemed to understand what the author was trying to portray and I don't think anyone else had read O'Farrell before. There is an author's note, at least in the copy I have, so I was surprised that the other group members didn't understand that it's fiction based on the real-life characters but with some alterations from the commonly-known or assumed story, based on her research, along with the magical touch of her own imagination.

Highly recommended - A story of family dynamics, unique personalities, finding love, discovering your passion, and how very difficult it is to break through grief. While Hamnet is a work of fiction, I suspect it is very well researched. O'Farrell makes you feel, smell, and hear the time in which the book takes place. Marvelously done.

Hamnet was my third read by O'Farrell and I'm so impressed with her that I've started an O'Farrell section on my shelves, although I don't know what I did with the first book, Instructions for a Heatwave. I may have passed that one on. I enjoyed it but it didn't blow me away like the last two O'Farrells I've read, the other being I Am, I Am, I Am. Click on the titles if you're interested in reading the other reviews.