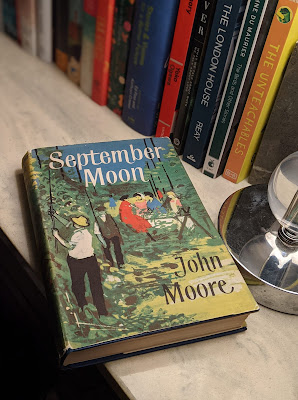 September Moon by John Moore is a book I ordered secondhand from Across the Pond for a buddy read hosted by @the_unhurried_reader of Instagram in 2019. Unfortunately, it didn't arrive till October of that year and the buddy read was by then over, having finished at the end of September. I've been eager to read it during a September ever since, but I must have been too booked up in 2020.

September Moon tells the story of the harvest of hops in England's Hertfordshire. During the month, itinerant workers — some Welsh, many traveling Romany, one an older man who has been harvesting all his life — arrive to do the harvesting. This is not a fast-placed, tightly plotted book, but at the same time there's no waste of words and the writing is lovely enough to suit anyone who enjoys literature. Instead, what you get is a farmer with chest pains; his son who had a fling with a "gipsy" girl [I'm going to continue with the spelling and usage of the word "gipsy" for convenience and to match the book, although I know Romany is the proper term] and tries to resume their affair but finds that her personality has changed; the Gipsy King who is challenged by the other tough-guy gipsy; the farmer and would-be inventor who is not a natural to farming, frequently loses money on crops and attempted inventions, and tends to drink off his profits at the local pub; and, his half-French daughter who has returned from London and whom the villagers suspect left in the first place because she got in trouble with a boy. There's also the threat of a spreading fungus ruining the crops.

Published in 1957, September Moon is a total comfort read. The tension is ever-present and there are plenty of questions to keep the pages turning, but in the end nothing awful happens. Literally nothing. All the fighting and drama and knives flashing by moonlight, the one farmer's illness and the other's threatened loss of his farm. Well, there's bloodshed and danger, but no tragedy and the plot twists are comfortable rather than nerve-racking. I think it'll be great going into the book in future Septembers knowing that it's that kind of read, taut enough to make the pages fly but pleasant enough to read when you're stressed out and just want to find something enjoyably tense in which nobody dies.

Highly recommended but apparently out of print - I checked to see if there are any newer copies available and it looks like the only available options are secondhand. Abe Books has quite a few but the first one to pop up is in a shop in Melbourne, Australia, so perhaps it was never published in the U.S. At any rate, if you're ever looking for something that is enjoyable to read and not in the mood for anything horrible to happen, September Moon is perfect. If I didn't happen to still be on that book-buying ban (I am determined to make it to the end of the year without buying another single book, in spite of having broken my ban a time or two), I would see if I could find some other secondhand books by Moore. But, I won't. Maybe next year.