The Sundial by Shirley Jackson 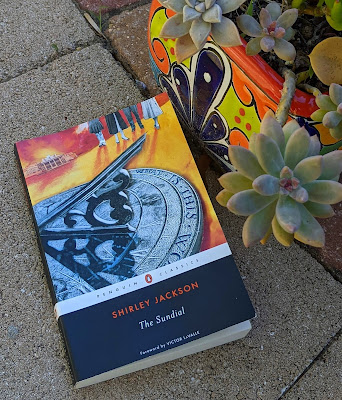 Mrs. Halloran frowned. "When, Fanny?" she asked. "When did all this happen?"

"Just now—this morning. It was just getting light."

"No," Mrs. Halloran said. "There are no gardeners working on the hedges yet. Your brother wants me to speak to them today."

"On a ladder," Aunt Fanny said.

"Quite impossible," Mrs. Halloran said. "You may very well have seen your father; I would not dream of disputing a private apparition. But you could not have seen a gardener trimming a hedge. Not here, not today."

I love Shirley Jackson's writing and I had no idea what I was getting into when I opened The Sundial. I thought I was about to read another suspense novel in the same vein as The Haunting of Hill House. While there is definitely a suspense factor, I think the book is particularly enjoyable for the way the author stabs at the ridiculousness of humans.

Aunt Fanny, as in the quote above, has gone for a walk in the garden on a foggy morning. After becoming lost, she gets a message from her long-dead father. The world is about to end in flames. Nobody will be spared but those inside the sprawling mansion in which Aunt Fanny lives with Mrs. Halloran, her husband, daughter-in-law and granddaughter, a few hired people who are almost part of the family, and the servants.

At first, everyone is skeptical. But, as time goes by it becomes clear to everyone exactly when the world is going to end and they begin preparing. As they do, guests show up and it seems wrong to cast them out to certain death, so they're allowed to stay. One of them actually climbs over the gate and in sharing how she got in, spouted another of my favorite quotes.

"When I am visiting a place," Gloria said, "I don't like being locked out, even if they don't know I'm coming."

Highly recommended - Oh, my gosh, what a hoot. I was expecting suspense but this book is witty, thought-provoking, and at times hilarious. And, you can't beat the sheer precision and stylishness of Shirley Jackson's writing. Is the end of the world really coming or are all the inhabitants of the household deluding themselves? Does what Gloria sees in a mirror with oil poured onto it confirm Aunt Fanny's message from her father? Who will stay and who will go?

This one is a serious keeper, a great read to usher in fall, and there's a lot of discussion-worthy material in it because each of the characters is very flawed in his or her own way. There's also the interesting question of what one would do if given the option that one of the characters is offered — take a large check and the chance that the world really will end and you'll die in two weeks, or stay and lose out on the money but maybe survive an apocalypse.

A couple interesting side notes: The Sundial is apparently a book that was chosen as a special read for this year's RIP Challenge. Humorously, I'd already pulled it off my shelf and put it in my bedside TBR before people started posting about the RIP. While I planned to read it, though, I imagine that the fact that I was seeing it everywhere nudged me a bit so I'm grateful that other people were talking about the book. I didn't read any of the reviews in order to avoid spoiling the reading.

Having read a handful of Shirley Jackson's books or books of her writings, now, I think I can finally put her on the Favorite Author's list. And, I definitely want to go back and read We Have Always Lived in the Castle. It was the first Jackson work I read and —believe it or not— I didn't like it, although I don't remember why. But, now that I'm familiar with Jackson's style and have figured out that her books are about people, their oddities and flaws, and how they can get worked up over nothing, I think I might enjoy it more. I donated my copy, unfortunately. Silly me.