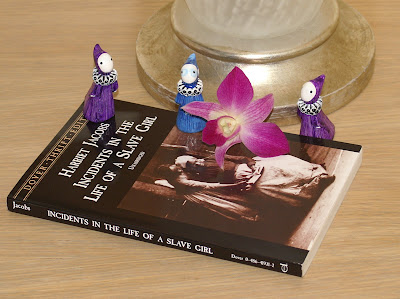 Incidents in the Life of a Slave Girl by Harriet Jacobs
This edition: copyright 2001, Dover
Orig. published in 1861
Nonfiction/Memoir
176 pp.

Can't find my copy amongst the refuse of my recent travels, so no quotes . . . but there was a great deal worth quoting as Incidents in the Life of a Slave Girl is an astounding memoir that offers a shockingly truthful peek into the world of slavery in the United States during the 19th century.

Harriet Jacobs lived a comfortable life, for a slave. She was a household servant whose grandmother lived as a free woman, yet was unable to save her own children and grandchildren from slavery. Jacobs was never whipped as punishment, which was rare. At times, she was able to find protection in the home of her grandmother, who had a thriving baking business. However, Harriet's life was terrifying in many ways. The moment she turned 15, her young "owner's" father, a physician, began to hound her to submit to him.

Jacobs described the relationship between slaves and their part-white offspring -- the "mulatto" children who followed their mothers into slavery, angered wives of slave owners by their very existence and were tucked away or sold away from their families as embarrassments. Jacobs herself had white blood and some relatives of hers were so fair-skinned that they were indistinguishable from whites, yet their color didn't help them in any way and they remained in slavery. Unwilling to give her body under pressure to the master of the household, as others had, and angered into showing the doctor what she thought via her actions, Jacobs avoided his dogged pursuit but had an affair with another white man of stature and gave birth to two of his children.

As Harriet Jacobs' refusals became more adamant, the doctor's methods to lure her into a trap grew sneakier, his jealous wife became more dangerous, and the threat of having her children sold to slave traders loomed. In order to save her children and herself, Jacobs arranged help from her grandmother and the father of her children, escaped and hid in a tiny garret room over her grandmother's storage room for seven years. Seven years of living in a tiny room in which she could not even stand, endured deadly illness and torturous cold or heat, and was able to watch her children but not speak to them or touch them ended when a friend located a sympathetic ship captain and obtained passage for her and another escaped slave.

Years of hard work and terror in New York -- as she was a known escapee doggedly pursued by the vindictive doctor -- finally ended when a kind employer purchased Jacobs, against her wishes, and set her free. Eventually, Jacobs was able to reunite with her children and lived a long life.

What I loved about this book: The raw honesty and sheer terror of Jacobs' story gave the book a part-horror/part-adventure feel. It is truly an amazing and absorbing narrative. The fact that Harriet Jacobs was taught to read as a child made the book particularly fascinating as it must have been doubly hard for an intelligent, well-read and hard-working woman who was dedicated to her children and understood the truth about slavery to exist in that world. And, indeed, it was part luck but mostly sheer determination and clever plotting that enabled her to eventually escape and remain free.

It's hard to fathom a time in which one could not disappear in New York City but instead was forced to go into hiding when people from the South who might recognize an escaped slave arrived in town, but that was the case. I looked online and discovered that the population of NYC was around 800,000 in 1860. That seems large to me, living as I do in a town with a population around 50,000; but in a time when few people of African descent lived in the area, it was apparently quite difficult to avoid being tracked down by a determined slave owner and easy enough to be spotted by visitors from the South. So, Jacobs' days of fear were far from over when she arrived in the North and obtained a job.

I began reading Incidents in the Life of a Slave Girl when I discovered it online and began to receive it by email from Daily Lit (which has changed dramatically in a year - excerpts are now available to purchase; not everything is free). I'm not sure how many installments I read, but reading off a screen has never been something I enjoy doing and I decided to just look for a hard copy of the book, after a time. I just recently located a copy in the museum shop of our local military park for a very reasonable $3.50 and snatched it up before leaving town. Highly recommended but be forewarned: it's not a pretty story.

Eagle-eyed Bonnie noticed the photo, above, which is also in my sidebar. Yes, I now have two purple poppets. While packing for our trip to Hawaii, I hunted for my little red poppet, Poppet (very clever name, eh?) and mistakenly grabbed the bag containing my spare poppet, whom I'd intended to save for future gift-giving. Well, you don't carry a poppet all the way to Hawaii and then just leave her in the bottom of your purse. That would be cruel! So, I had to take her out and name her. The word "Mahalo" is not a name -- it is a show of gratitude, the Hawaiian way of saying "thanks" or showing appreciation or respect -- but I considered several names and decided I liked Mahalo as a name. It's representative of something I heard frequently and which will always bring back fond memories of the trip. I'm calling Mahalo "Molly", which also gives her the distinction of being the only poppet I own who has been bestowed with a nickname. Lucky Molly. Left to right are Molly, Simone and Violet.

I've also recently purchased a green Christmas poppet, but she is, as yet, nameless (and in hiding). I hope to remember to pack her in the suitcase, this next go-around. I am profoundly tired of packing and unpacking. How on earth do million-milers like my husband tolerate it? Oh, yeah, they leave the suitcase in the car and make the wife unpack. I forgot.

Hawaii pic of the day (although that photo of the girls was taken on our bedside table in the hotel, so it was also taken in Hawaii). Just when you think you've got the lagoon all to yourself, along comes some nut with a camera: 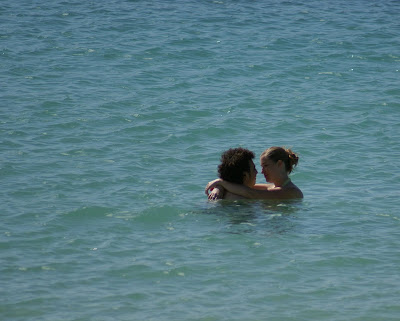 Awwwww, how sweet! If you know this couple, feel free to pass this photo on to them.

Bookfool, who can still feel the trade winds when she closes her eyes
Posted by Bookfool at 4:42 PM