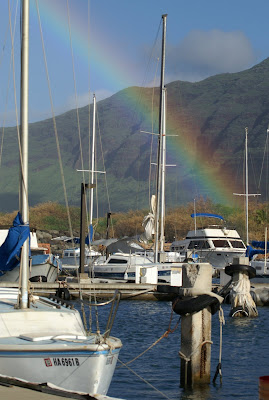 Busy week, anyone? I hope it's been a good one. I'm a little behind, here, but it's time to wahoo. I feel wahooey.

The photo above is an example of wahoo #1. I still close my eyes, now and then, to transport myself back to Hawaii. There's a lot to wahoo about in Hawaii, but . . .

1. Wahoo for sunshine and rainbows, wherever they may be.

2. Shopping!!!!! Wahoo for shopping! No pics, but I had a little fun doing some post-Christmas shopping, yesterday. I'm particularly fond of my new scarf. I'm in Oklahoma City (my mother is back in the hospital, but she's doing great) and Aeropostale at Penn Square Mall, just down the road, was having a terrific after-Christmas sale. When I got to the cash register with my purchases, I noticed a mannequin waaaaaay up high. And, it was wearing the cutest darned scarf. I asked if it was the only one in the store and the clerk told me, "Yes, but it's 70% off and I have this nice, tall guy, here." She pointed at a lanky fellow standing behind her and I said, "Okay. Send him up." He climbed up the counter like a monkey and tossed the scarf down. So, let's just add . . .

4. Back to Hawaii. We may keep Hawaii going on this blog, for a while. Wahoo for dophins: 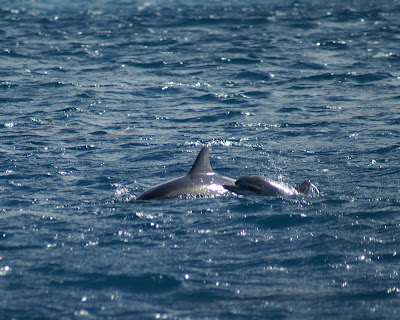 What is it about dolphins that makes them look so friendly? These two are spinner dolphins spotted during our morning of snorkeling. They weren't in the mood to hang out with us, but I still thought they looked like they were smiling. Dolphins look very wahooey.

5. Wahoo for cheap laptops. The signal here is sometimes a little hinky - they claim it has to do with trouble following the recent ice storm, but it's a lifesaver. At least I can usually check my email before I get kicked off. That's a happy thing, isn't it?

6. Wahoo for the upbeat, kind and very professional medical practitioners who spent their Christmas holidays taking care of people.

7. Wahoo for the folks who took time out of their own Christmas Day to brighten up Christmas in the hospital. There were two women and a young girl with a box full of tiny Christmas bags full of candy, handing them out to visitors and wishing them a Merry Christmas on Tuesday. What a lovely upper and a tremendously kind thing to do!

I'll try to wahoo on a Wednesday, next week, but I just never know when I'll have the time or the connection, these days. A new year is coming, soon! And, I don't have to listen to fireworks on New Year's Eve, this year. Well, wahoo for that. Not into explosives. I'm just not.

Hope everyone had a terrific Christmas. Reading has been nil, here - I just finished one Christmas romance that didn't thrill me. What are you reading?

Bookfool
Posted by Bookfool at 10:55 AM