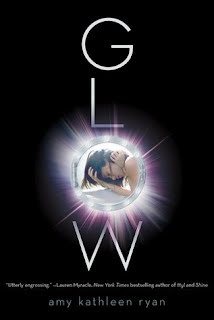 Glow by Amy Kathleen Ryan is the first in a young adult series of books about two ships launched from a dying Earth to create a new settlement on another planet. The New Horizon was launched before the Empyrean and should be far ahead of the Empyrean. But, when the New Horizon draws near to the Empyrean, a fierce battle takes place and all the young females from the Empyrean are taken to the New Horizon. Many of the adults are killed but some pursue the New Horizon and the rest must risk their lives to restart the Empyrean's damaged engines.
Waverly and Kieran, at a mere 15 and 16 years old, were already considering marriage. Fertility is reduced in outer space and the sooner they have children, the better. Now separated, Waverly has been told the Empyrean was destroyed, Kieran, her mother and all but the "rescued" girls dead. But she suspects the captain of the New Horizon is not telling the truth. How will Waverly find the adults, if they're still living? What do the people of the New Horizon want from them? Will they be able to escape or is there even a ship to run home to?
While Waverly is unraveling the puzzle of her imprisonment on the New Horizon, Kieran must deal with the horrors of being left behind. With all the remaining adults risking their lives, the job of running the ship falls to the eldest of the boys. But, Seth (who also has a thing for Waverly) wants to be in charge and will do anything he can to sabotage Kieran. When Seth's games become dangerous, will Kieran survive?
Wow. What a fun book. While Ryan's writing is a bit rough around the edges, Glow is such an exciting, plot-heavy adventure that imperfection doesn't matter. The story is so massively entertaining that writing flaws fade into the background. I'm looking forward to reading the second book, Spark, which Tammy just reviewed.
Andi recently wrote about story versus writing and I think Glow is an excellent example of why I personally feel that the story tends to win. I love a book that's well-written, but if the story isn't there, beautiful writing is not enough.
Alyce didn't like Glow at all. Her review is excellent. I have to agree that there were some oddities to the casting (read her description of Seth - he and Kieran are definitely odd characters in their contrasts) but I enjoyed the adventurous aspect of the story so I tried to ignore those character flaws and just enjoy myself.
Tammy sent me her ARC of Glow. Many thanks, Tammy! My recent reading rut was threatening to drag me into a slump but Glow saved me. I highly recommend this book. The writing isn't brilliant, but the plotting is excellent. Definitely a grabber.
Week-off report:
I had a lot of busy-busy things that I had to do, last week, none of which were all that thrilling so I guess the excitement of the week involved moving furniture. In my continued quest to bring more light into our living area (which is dark thanks to the shade of our humongous old oak trees), I decided to move some bookshelves from the living/dining room to the office. Isabel and Fiona both had fun playing on the shelves before I refilled them. 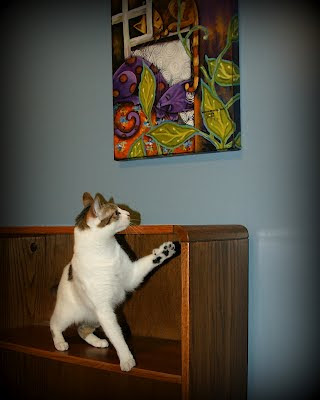 Unfortunately, we managed to scratch the hardwood flooring in the office, in spite of using sliders, so we had a few delays. First, the run to the hardware store to get sliders to protect the flooring. Then, another run to get markers to repair the scratches. And, then we decided it wouldn't hurt to get a little carpet runner to protect the flooring from future damage.
After all that, I reorganized the books and set aside about 20 to donate. Most of what I keep on those particular shelves is nonfiction: reference books, gardening, photography, design, history, writing, etc. I was surprised to find that the biggest category is design. I have loads of books on interior and exterior design (including a book on historical fabrics and wallpaper, Jamie Durie's The Outdoor Room, etc.), architecture, painting, stained glass. You wouldn't know it from looking at the interior of my house; apparently I'm a bit of a dreamer.
In the evenings, we indulged in a Superhero Movie Weekend. After seeing The Avengers in the theater, we were all in the mood to watch a few more superhero movies. We watched Iron Man 2, Thor and Captain America. Of the three, Thor was the surprise favorite, Iron Man 2 the biggest disappointment. Captain America was fun but more in the classic comic book vein (which isn't really my thing) with a nasty villain and a sci-fi bent. We watched one movie each night. It was nice to relax together after working on the house, something we really don't do often, anymore.
Kiddo needed a "professional grade" photo to send to the university for his ID and that turned out to be a barrel of laughs, too. Out of about 30 photos I snapped, his eyes were only open in 2 or 3. He has such a quick blink reflex that I eventually had to quit using flash. It was honestly hilarious. We laughed so hard we all had tears streaming down our faces. My favorite photo is one I snapped as Kiddo was laughing and wiping an eye. So cute. I have been forbidden to share his photo on the blog or I would.
Only two books have arrived in the past two weeks. I'm reading one of them: Jasmine Nights by Julia Gregson. The other book is A Genius for Deception by Nicholas Rankin, subtitled "How Cunning Helped the British Win Two World Wars." I got it from Paperback Swap.
One wahoo for the day: Fiona just reached up and batted my indoor wind chimes. Isabel gives them a whack, occasionally, but this is the first time I've seen Fiona swipe at them. She was a little more tentative than Izzy. It's terribly cute to see a cat swat wind chimes, but it happens so fast that I still have not managed to photograph that moment.
Gotta go. Wishing you many wahoos!
©2012 Nancy Horner. All rights reserved. If you are reading this post at a site other than Bookfoolery and Babble or its RSS feed, you are reading a stolen feed. Email bookfoolery@gmail.com for written permission to reproduce text or photos.
Posted by Bookfool at 10:45 PM