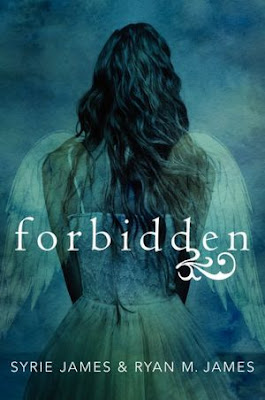 Forbidden by Syrie James & Ryan M. James
Copyright 2012
HarperTeen - Young Adult/Paranormal
412 pp.
I wish I was on HarperTeen's mailing list. I managed to win my copy of Forbidden from Alyce of At Home With Books and it was such a pleasant diversion.
16-year-old Claire Brennan has never lived anywhere for long. It has always seemed as if her mother is running from something. But, she's been attending exclusive Emerson Academy for two years and she loves her school. When Claire begins having psychic visions, she's afraid to tell her mother. What is her mother running from? Why are strange things suddenly happening to Claire?
Alec MacKenzie is a Watcher, an angelic being whose job is to eliminate the Fallen when they become too dangerous. But, after over 100 years of doing his job, he's weary and just wants to give human life a try. He's had many years to learn a lot of information, so a school with a reputation for excellence seems like a nice place to hide and play at being normal. But, trouble follows. When Alec's godfather says there's a dangerous Halfblood roaming around Emerson, Alec agrees to help locate the Halfblood only if his godfather will guarantee not to turn Alec in.
Claire has a terrible crush on Alec and the feeling is mutual. But, Alec knows their love is forbidden. Is there a way for Alec to do his job and continue to spend time with Claire? Or must they be separated for eternity? Even worse, could their romance end in death?
What I loved about Forbidden:
I've been in a YA mood, lately, and Forbidden was just what I needed. It's got danger, forbidden romance, a dubious character or two (or four), and enough suspense to make the pages fly. The writing is also light enough for someone who is in the middle of working on preparing to buy a house and move. Haha. Had to throw that in. I do have a little trouble focusing on more intense reading material when I've got a lot going on, so young adult novels are particularly wonderful for such times.
I liked the characters and was swept away by the dilemma, the romance, and the paranormal elements. The lightness of the writing was very pleasant, since I've got a lot on my mind.
What I disliked about Forbidden:
Apart from answering with the word "Aye" instead of "Yes", Alec's dialogue does not make him sound like a Scot, but he is from Scotland. He pretty much sounds like everyone else in California and is most distinguished by the fact that he's lived a monk-like existence and has only eaten extremely healthy food. So, pizza and other foods are a shocking joy to him and, actually, his new food experiences and special abilities set him apart more than any attempt at a believable accent. I don't think that's a terrible thing, though, as a lot of authors overdo their attempt to make someone sound authentic, which ends up distracting the reader from the storyline. So, Alec's lack of Scottishness is a minor complaint.
Recommendation:
Loved it! Recommended to paranormal fans who like a clean, light read with plenty of romantic tension, solid writing and a nice plot. This is only the second book I've read with angels in it so I can't say how it compares to others but I enjoyed Forbidden. It can be a tiny bit sappy, at times, and there is a smidgen of love triangle -- which, of course, has become a bit of a tired, old thing in YA -- but I liked both of the male characters and very rarely thought, "Oh, come on!" That may be because I haven't read much YA, this year. Forbidden swept me away and entertained me. That's all I care.
And, the latest news:
Things seem to be progressing rather quickly with the house purchase. Those who know me well will understand when I say I'm most excited about the fact that the neighborhood we're planning to move into has sidewalks and the city has leash laws. The absence of both has been really frustrating because we both grew up walking and riding bikes in neighborhoods where dogs were fenced and not a threat to active people (and dogs were not threatened by cars, which I believe is equally important). I cannot wait to ride a bike in my own neighborhood!
The cats are going to probably be peeved, though. I just have a feeling. Cats aren't really thrilled with the concept of change. We shall see. 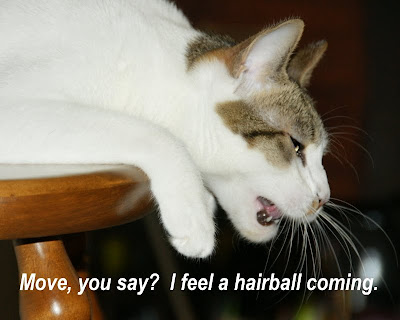 Happy Monday!
Bookfool, who is trying to stop admiring all the improvements she's made to the house she's planning to sell.
©2012 Nancy Horner. All rights reserved. If you are reading this post at a site other than Bookfoolery and Babble or its RSS feed, you are reading a stolen feed. Email bookfoolery@gmail.com for written permission to reproduce text or photos.
Posted by Bookfool at 1:14 PM