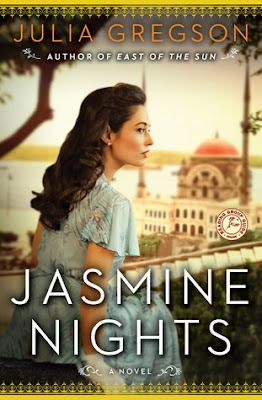 Jasmine Nights by Julia Gregson
Copyright 2012
Touchstone Books - Historical Fiction/WWII/Romance
416 pp.
Saba Tarcan has been singing since she was a small girl. Now 23, Saba has decided to do her part in the war effort. While singing at a hospital, she meets a handsome fighter pilot, Dom Benson. Both are immediately smitten with each other, but Saba is determined leave Wales; her Turkish father objects to Saba singing in public. She joins Entertainments National Service Association (ENSA) and is sent to join a troupe of entertainers in North Africa, just as she's getting to know Dom.
Recovered from burns received when his plane was shot down, Dom returns to flying and gets a friend to pull strings so that he can serve in the same area as Saba. Communication is complicated by war, yet Saba continues to invade Dom's thoughts. When they finally manage to meet up, Saba and Dom are determined to get together. But Saba has been recruited to do work for the British Secret Service and can't always explain her absences, sparking jealousy and bitter feelings of rejection in Dom.
Meanwhile, North Africa is heating up; soon, the Nazis are expected to invade Alexandria. Will the secrets they must keep from each other tear them apart or can Saba and Dom stay alive long enough to solidify their relationship?
What I loved about Jasmine Nights:
I'm a sucker for books that are set during WWII, so I particularly enjoyed the glimpses into the time period, learning about ENSA and finding that entertainers were, in fact, used as spies during WWII. I don't think I've ever read any other WWII stories told from the viewpoint of an entertainer.
The details of the sights, sounds, smells and the hardships of living in the desert were what I found most engaging about Jasmine Nights.
What I disliked about Jasmine Nights:
The f-word was dropped at least half a dozen times in Jasmine Nights. I felt like the book lost a bit of authenticity in that regard. Sure, soldiers swore. The acronyms FUBAR and SNAFU both originated during WWII. But, that particular vulgarity was not flung about so casually at the time. Saba's use of the word (and, I think in one case, Dom used the word in her presence) really threw me. Women were less likely to swear, back then, and men tended to water down their speech in the presence of women and children.
Otherwise, the only thing I really disliked about Jasmine Nights was that it leaned toward romance and I thought the hero was a bit of a sap. I can't say I ever really felt much for the heroine, either. Oh, and occasionally I had trouble figuring out what was happening. But, only a few scenes confused me.
Wait, I thought of something else! But, part of it is spoilery. The unspoilery bit: LOTS of sex and no mention of protection but no pregnancy (although the sex is not overly graphic). That's a big no-no in my book. There either needs to be some mention of protection or consequences . . . sex amongst the young and fertile isn't realistic otherwise, is it? The spoilery bit will be thrown in at the bottom of this post, after the asterisks. See below***
The bottom line:
Recommended particularly to those who like a slightly longer, more detailed and character-driven/romantic book. There's not a great deal of action. I expected a bit more danger/close calls with the spying. Jasmine Nights was slower-paced and more romance-focused than anticipated. I gave Jasmine Nights an above-average rating of 3.5/5 at Goodreads. I liked it but didn't love it and I'm not entirely certain I would have finished the book if it didn't happen to be a book I was sent for review. The author definitely needs to work on tightening up her writing, in my humble opinion.
Pic of the day (taken in Oxford, MS), a sunflower to match the yellow edging on the cover of Jasmine Nights: 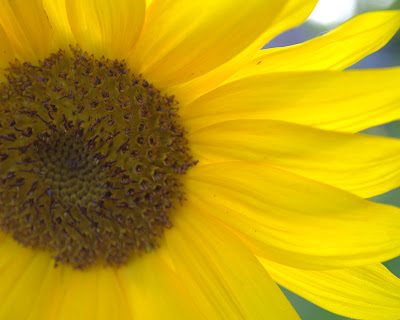 I keep forgetting to add my cover thoughts . . . again:
I don't know why writing cover thoughts keeps slipping my mind, but I love the cover of Jasmine Nights. The only thing that looks a little off to me is the length of Saba's hair. The model's coloring is right and I love the blend of her colorful dress (although I can't say whether or not it's right for the decade) and the gorgeous city background. Definitely an eye-catching cover.
***SPOILER WARNING!***
There was a scene I found particularly confusing because it appears that Saba was raped -- but I wasn't entirely certain, possibly because the character was trying to convince herself that it didn't happen. Again, no consequences, but worse than the consensual sex because there didn't seem to be any big emotional ramifications. I know several women who have been raped. Two of them attempted suicide; one succeeded. The other has channeled her anger in a very positive way, thank goodness. Rape should never, ever be glossed over. It has heavy emotional repercussions.
©2012 Nancy Horner. All rights reserved. If you are reading this post at a site other than Bookfoolery and Babble or its RSS feed, you are reading a stolen feed. Email bookfoolery@gmail.com for written permission to reproduce text or photos.
Posted by Bookfool at 12:20 PM