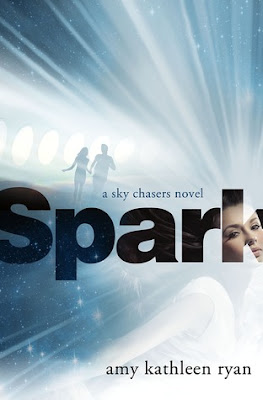 Spark by Amy Kathleen Ryan
Copyright 2012
St. Martin's Griffin - Young Adult/Sci-fi
2nd in the Sky Chasers series - 1st book is Glow
309 pp.
To be released in July, 2012. ARC sent by my friend, Tammy. Thanks, Tammy!
Warning: This review contain spoilers from the first in the series, Glow. Please skip this review if you don't want to know how Glow ends.
In Glow, the first in the Sky Chasers series, Waverly and Kieran were in love and considering marriage when the Empyrean was attacked by its sister ship, the New Horizon. Most of the adults were killed and the young females were all kidnapped, including Waverly. On the New Horizon, Waverly fought to find the remaining parents and release them, unsuccessfully. She did, however, manage to save most of the females from captivity and escape to the Empyrean.
Spark picks up where Glow left off. Waverly and the other girls have returned to the Empyrean without any of the missing parents. Upon her return, Waverly finds Kieran in command of the ship and former leader Seth imprisoned in the brig. Kieran has become a strict captain but there's a hint of megalomaniac in the way he runs the ship; and, his "services" hint at the religious leadership of the New Horizon's Anne Mather. Waverly has become a pariah because most of the girls are angry with her for not succeeding at rescuing their parents.
When the ship is rocked by an explosion and Seth finds the door of his cell unlocked, everyone assumes Seth caused the explosion. But, Seth knows better and is determined to figure out who is sabotaging the Empyrean. Waverly is the only person who understands Seth enough to help him instead of blaming him, not realizing that a dangerous stowaway will threaten their lives.
Meanwhile, Kieran must make a crucial decision. Parents from the Empyrean are still being held captive on the New Horizon. Should he make a deal with the dangerous Anne Mather or attack the New Horizon and attempt a rescue? Can Anne be trusted to return the captives or is the saboteur working under her orders? Will anyone survive the next round of deadly explosions?
What I loved about Spark:
I was very, very impressed with this sophomore entry in the Sky Chasers trilogy. In my review of Glow, I declared the writing a little awkward but mentioned that it didn't matter because the story was so well-plotted that the writer's flaws faded into the background. It really kind of shocked me to find the writing in Spark dramatically more mature than that of Glow. Way to go, Amy Ryan!
As to the storyline, it was every bit as adventurous and dramatic as that of Glow. The characters changed, grew, and hardened a bit. The plot thickened. There was really no romance at all, which is very refreshing. Spark is simply a marvelous, escapist read and one of the best "second in a series" books I've read, far from the typical plotless place-holder that is often found in the middle of a trilogy.
What I disliked about Spark:
Occasionally, I had to wonder why Waverly didn't have more admirers (some of the girls supported her, but not many). She did rescue the young females from the New Horizon, after all, even if she did not manage to bring their parents back to the Empyrean. But, that was the only thing that pulled me out of the book even slightly.
Recommendation:
Highly recommended to fans of YA and sci-fi. Excellent characterization, fantastic plotting and even better writing than the first book in the series make Spark a winner. Spark is not a stand-alone novel. Readers will definitely need to read Glow before Spark. I was completely swept away by both and the wait for the third book is going to be completely miserable. I've heard it will not be released until 2013.
Cover thoughts:
The cover is eye-catching but I'm a little offended by the perfect model with bee-stung lips whose face shows in the letter "k". Glow's cover made Waverly look more like a teenager and she is only 15, so that's a good thing. Is the model supposed to be Waverly? I'm guessing the answer is "yes" but she certainly does not fit my image of Waverly at all. In Spark, Waverly is working as a combine repairman. She is usually dirty and casually dressed; she certainly would never look perfectly made-up and I find the model looks more like a 20-something than a 15-year-old. My copy is an ARC, so I can't say the cover will necessarily stay the same, although the cover image at Amazon does currently match the ARC image shown above.
Best recent conversation:
While purchasing something at a local drugstore, I somehow ended up chatting with the clerk about e-books versus paper copies. She told me she's been given a Nook and said, "But, ask me where it is." She said she can't bear to do without the feel of a book in hand and that e-books are killing bookstores, so she won't buy them. What an unexpected and fun little chat that was!
Just a few of the thousands of books I'm going to have to pack up and move 35 miles: 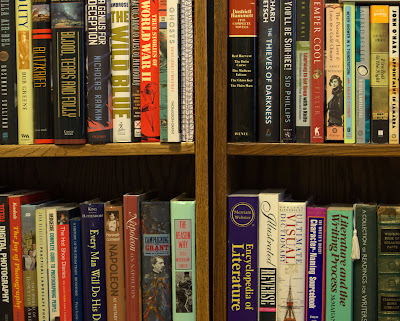 If I'd known we were going to make an offer on a house, I would definitely not have moved those shelves from one room to the other, two weeks ago. But, they look really tidy, don't they?
©2012 Nancy Horner. All rights reserved. If you are reading this post at a site other than Bookfoolery and Babble or its RSS feed, you are reading a stolen feed. Email bookfoolery@gmail.com for written permission to reproduce text or photos.
Posted by Bookfool at 11:11 AM