Three minis - Wait Till Helen Comes, The Man Who Never Was, and Ned Kelly & the City of the Bees by Hahn, Montagu and Keneally

I'm pairing up these three books for mini reviews because none of them are advance readers.  In fact, they're all pretty old. 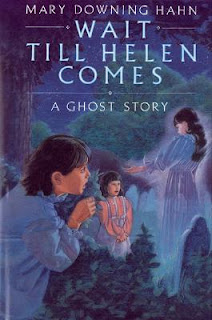 Wait Till Helen Comes: A Ghost Story by Mary Downing Hahn (originally published in 1986) is a book I purchased during a recent sale of Hahn's e-books for $1.99.  I've never read any of the author's creepy children's books, although I've desired to for a long time and decided reading a ghost story would be a great way to sneak in a little bit of RIP-like reading (I never did sign up for the challenge).

12-year-old Molly's family moves to a new house near a cemetery and her artist parents expect her and her brother Michael to bear responsibility for their 5-year-old stepsister, Heather.  Michael is a budding naturalist who disappears in search of specimens, leaving Molly to deal with a stepsister who wants to have nothing to do with her.  When a ghost named Helen appears and tries to lure Heather to her death (to keep Helen company in the afterlife), Molly's growing concerns are dismissed as irrational fears until disaster strikes.

Unfortunately, the Library Journal review at Amazon contains spoilers.  I thought that wouldn't be a problem but I was wrong.  The suspense simply wasn't there because I knew what was going to happen.  Still, I enjoy a good ghost story and was in the mood for something extremely light so I don't regret reading Wait Till Helen Comes.  The biggest problem I had with the story involved annoyance with the parents.  They were extraordinarily selfish, expecting a 12-year-old girl and 10-year-old boy to watch out for their little sister almost all day, every day.  Heather is a typical stepchild who feels like her father's affections have been stolen from her and she frequently slipped away from Molly.  Unsurprisingly, Molly didn't always bother attempting to keep an eye on her little stepsister. While I found the lack of parental involvement frustrating (although, I suppose, it's not that uncommon in books directed at children of that age), I enjoyed the story, in general and would recommend it. 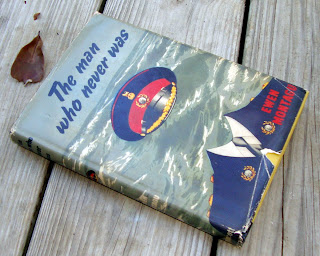 I've already mentioned The Man Who Never Was by Ewen Montagu, but you must know the story behind this find.  I was in our former town to pay some bills and decided to take a trip to the library's perpetual sale corner because it had been a frustrating day and I always enjoy going to the Bookmark, even if I only end up wandering around and buying nothing.

The Man Who Never Was caught my eye because it had that "old book" look that I adore.  I have a little row of old hardbacks in my bedroom.  Most of them are titles I'll read; a couple are just cool to look at.  I liked the looks of the cover and was a little stunned when I opened the book to find that it was about Operation Mincemeat - something I've desired to read more about, since I read the fictional tale about it: Operation Heartbreak by Duff Cooper (which apparently led to the request for Montagu to write about the facts of the operation for public clarification).

For a whopping 25 cents, I came home with the true story of Operation Mincemeat, written by the man who came up with the idea.  It's only about 150 pages long and some people consider it dry.  For my part, I appreciated the "just the facts" approach and found it rather exciting.  Because Ewen Montagu proposed the idea, he describes the challenges of the mission: finding an appropriate body and getting permission to use it, where to place it in the water so that wind and tide would deposit the body in the right place, how to dress it and what documents to include with the body to make the fake documents meant to mislead the Germans appear real, and what they found out about the success of the mission after V-E Day.  It was a fantastic read, lots of photos were included and I read it in a single sitting.  Highly recommended to those interested in WWII in general or Operation Mincemeat, specifically.  My copy was published by J. P. Lippincott Company in 1954.  Near as I can tell, that publisher no longer exists. 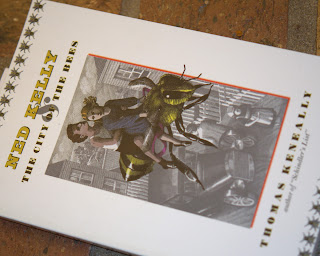 Ned Kelly & the City of the Bees by Thomas Keneally caught my eye because of the name "Ned Kelly".  I've read very little about the Australian outlaw, but I desire to read more.  However, apart from a clever reference to the outlaw, the story is unrelated; this Ned Kelly is entirely fictional.

Told as if the story happened to him when the narrator was a young boy, Ned reflects on the appendicitis that landed him in the hospital.  After receiving a shot to put him to sleep for surgery, he sees a bee on the window above his head.  The bee talks to him, shrinks him down to bee size and he and another miniaturized child (Nancy Clancy, who appears to be the same age as Ned but is actually 120 years old) go to live in a bee hive for the summer.

Ned Kelly & the City of the Bees is a wildly creative story, beautifully written, which nicely imparts plenty of interesting information about bees.  It would make an excellent book to read to children who are patient enough to sit still through chapter books read by parents or for children old enough to read chapter books on their own (Amazon says, "ages 9 and up" but mine would have read it at 7 or 8).  Highly recommended. I'm a little disappointed to find that Ned Kelly & the City of the Bees is Thomas Keneally's only children's book, but he's written a large number of fiction and nonfiction books and I've yet to read Schindler's List, so I have plenty of other Keneally books to look into.  My copy was published by David R. Godine in 1995.  I thought the storytelling was excellent, enough to look into the publishing company's other offerings.  I checked out David R. Godine's informational page and was also impressed with their goal to produce quality books (acid free, some hardbacks still bound by cloth) of eclectic variety.  I'll be spending some time reading about this publisher's titles.


©2012 Nancy Horner. All rights reserved. If you are reading this post at a site other than Bookfoolery and Babble or its RSS feed, you are reading a stolen feed. Email bookfoolery@gmail.com for written permission to reproduce text or photos.