Help for the Haunted by John Searles 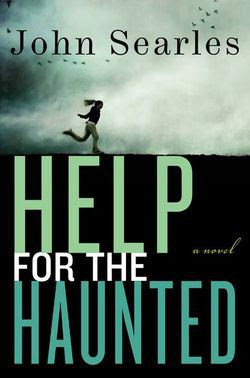 Whenever the phone rang late at night, I lay in my narrow bed and listened.

Sylvie's story began when her parents answered a late-night phone call.  Their business was helping the haunted and possessed; it was not unusual for the Masons to go to work in the middle of the night.  But, on that fateful night Sylvie sensed danger.  As she obediently sat waiting alone in her parents' car outside a darkened church, snow blanketing the windows, she heard gunshots and left the safety of the car to find out what was happening.

Her parents were killed in the church, that night, Sylvie the only known witness.  But, her sister Rose knows more than she will let on. When Sylvie's identification of the murderer comes into doubt, Sylvie begins to question her memories and sets out to discover the truth.  Who was in that church, behind the gun that damaged one of Sylvie's ears and killed her parents?  Why is Rose so bitter and why has she forbidden Sylvie to mention that Rose was also in the church, having lured her parents there, if she was not the murderer?  Why has the basement light come on in their house and what is down there? What exactly did the Masons due to "help the haunted"? What did the man who wrote a book about the Masons say that caused them to fall on hard times before their death?

Help for the Haunted jumps back and forth in time, describing the events leading up to the death of the Masons while following Sylvie as she attempts to determine who killed her parents and why.

A mysterious shooting, a haunted basement, the memory of a possessed doll and an oddly shifty sister.  When young Sylvie realizes she may have identified the wrong man as her parents' murderer, she must piece together what really happened the night her parents died.

What did you like best about Help for the Haunted?

I liked the fact that Help for the Haunted was just creepy and suspenseful enough to suit me without being so scary I couldn't read it at night. The basement contains objects that may or may not be haunted, which lends a nice chill to the atmosphere and since the details about what the Masons actually did for a living were held back from Rose and Sylvie, there are a lot of questions posed at the beginning of the book.  Help for the Haunted is nicely paced, the pieces of the story revealed slowly while ratcheting up tension until the exciting scene in which Sylvie finds out the answers and nearly loses her life in the process.

What did you dislike about Help for the Haunted?

I was expecting it to be much different than what it turned out to be but to say what part of Help for the Haunted didn't match my expectations would be a spoiler, unfortunately.  It wasn't anything that ruined the reading; that much I will say.

I like all the scenes with Dereck, a former boyfriend of Rose's.  Rose is a bitter character who becomes a bit tiresome, at times, and Sylvie takes time to develop some intestinal fortitude, since she's accustomed to trying to please everyone. The secondary characters give the book a bit of spark.  Dereck's scenes help to soften the story while Sylvie's uncle and her parents' biographer add interest.  I also loved the climactic action scene in which the identity of the killer and the killer's motive are explained, as well as the scenes in which Sylvie reflects on the childhood game she and her sister played on the foundation of a house that was never completed.  There's a final chapter in which things are quietly wrapped up.  I was hoping the author would wrap the book up in a way that explained what happened to Sylvie and liked the way he tied up all the loose ends.

Recommended - (rating: 4/5) A suspenseful, mysterious, well-paced story about how things are not always what they seem, Help for the Haunted is also about kindness, friendship, lies, the relationships in a dysfunctional family and the difficulty of being the trusted child who feels obligated to live up to parental expectations. Help for the Haunted is suspenseful and atmospheric enough to make a nice read for the RIP challenge, definitely recommended to those in the market for creepy books.

I like the cover because the color combined with the image of a girl running give it a slightly spooky look, but it's nothing special. The large lettering makes the cover appear . . . common, I guess.  It looks like a typical mystery/suspense.

I received a copy of Help for the Haunted from HarperCollins in return for an unbiased review.

©2013 Nancy Horner. All rights reserved. If you are reading this post at a site other than Bookfoolery  or its RSS feed, you are reading a stolen feed. Email bookfoolery@gmail.com for written permission to reproduce text or photos.
Posted by Bookfool at 3:22 PM