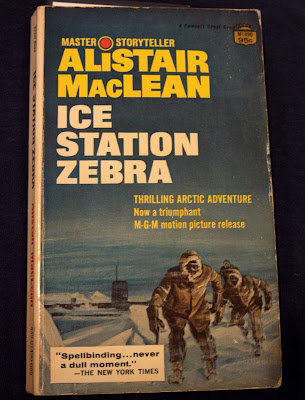 Interesting to note that in the movie based on this book, the commander was played by the tall and dashing Rock Hudson.  I had pictured someone more along the lines of Ralph Waite, the man who played the father in The Waltons, as I was reading, partly because Commander Swanson was also a cheerful man and I remember Pa Walton smiled a lot.  I know I'm old.

An arctic science station known as Drift Ice Station Zebra has been damaged by a horrific fuel oil explosion and the nuclear submarine Dolphin and its crew have been called upon to attempt to reach Ice Station Zebra's survivors.  At the last moment, a doctor has boarded the sub. The commander doesn't trust him; however, after checking to make certain that everything is in order, the doctor is allowed aboard.

But, there's a saboteur on the Dolphin, the damage to Ice Station Zebra may not have been an accident and communication is spotty at best. Will the crew of the Dolphin be able to find Drift Ice Station Zebra?  If so, how will they get through the arctic ice surrounding the floating base and what will they find?

When a science station near the North Pole is seriously damaged, an American nuclear submarine is sent to the rescue.  But, even if the crew of the Dolphin can survive a saboteur's repeated efforts to stop them, will they be able to survive an Arctic storm and a desperate murderer?

What did you like best about Ice Station Zebra?

I loved the language, the fact that things keep happening (it truly is a "thrilling" thriller), the fact that it had a very cold setting and I'm so tired of the freaking heat, the author's sense of humor.  The book really is a roller coaster ride - more thrilling than anything I've read in quite a while.

A bunch of excerpts:

The tallest of the three tall men, a lean, rangy character with wheat-colored hair and the definite look of a man who ought to have had a horse between his legs, stood slightly in advance of the other two.  Commander Swanson gestured toward him.

"Lieutenant Hansen, my executive officer.  He'll look after you till I get back." The commander certainly knew how to choose his words.

"I don't need looking after," I said mildly.  "I'm all grown up now and I hardly ever feel lonely."

Commander Swanson's cabin was bigger than a telephone booth, I'll say that for it, but not all that much bigger to shout about.  A built-in bunk, a folding washbasin, a small writing desk and chair, a folding camp stool, a locker, some calibrated repeater-instrument dials above the bunk, and that was it.  If you'd tried to perform the twist in there, you'd have fractured yourself in a dozen places without ever moving your feet from the center of the floor.

This ridged and hummocked ice cap had a strange quality of elusiveness, of impermanence, of evanescence; one moment there, definitively hard and harsh and repellent in its coldly contrasting blacks and whites; the next, ghost-like, blurring, coalescing and finally vanishing like a shimmering mirage fading and dying in some ice-bound desert.

The ice storm was no longer the gusting, swirling fog of that morning but a driving wall of stiletto-tipped spears, near-lethal in its ferocity, high-speed ice-spicule lances that would have skewered their way through the thickest cardboard or shattered in a second a glass held in your hand.  Over and above the ululating threnody of the wind we could hear an almost constant grinding, crashing, and deep-throated booming as millions of tons of racked and tortured ice, under the influence of the gale and some mighty pressure center heaven knew how many hundreds of miles away, reared and twisted and tore and cracked, one moment forming another rafted ridge as a layer of ice, perhaps ten feet thick, screeched and roared and clambered on to the shoulders of another and then another
[. . .]

"What do your men think of your making them risk their lives to save the good name of the submarine service?"

"You heard the captain," Rawlings said.  "We're volunteers.  Look at Zabrinski there: anyone can see that he's a man cast in a heroic mold."

"It's tragic," Rawlings said gloomily. "Not the personal aspect of it, I mean the loss to the U.S. Navy.  I think I may fairly say, Lieutenant, that we are--or were--three promising young men.  Well, you and me, anyway.  I think Zabrinski there had reached the limit of his potentialities."

A pity they had no submarines in the Middle Ages, I thought; the sight of that little lot down there would have given Dante an extra fillip when he started in on his Inferno.

What did you dislike about Ice Station Zebra?

There were moments I couldn't quite follow the logic of the doctor who works to unravel the mystery of what happened at Drift Ice Station Zebra and who is responsible for the sabotage but it's not unusual for me to think, "How on earth did [whoever] come to that conclusion?"  Mysteries often go over my head.

Highly recommended - Loads of fun.  I must share the cover quotes, all of which I agree with:

Pulse-Pounding adventure beneath the arctic ice -- "An exciting thriller with a macabre and dramatic background." --Publisher's Weekly

"Don't start reading this book unless you have a free evening, for you won't want to lay it aside until the very end." --Seattle Post-Intelligencer

Cover thoughts:  I love that cover.  It's a work of art.  In fact, one of the reasons I adore older books is the fact that their covers were so obviously painted specifically for a single book -- not stock images or photos that would be used and then used again with a slightly different coloring or lettering, as we often see, now.  The cover image deposits you right in the midst of a scene as three men, the submarine still in view, struggle across the ice.  Awesome.