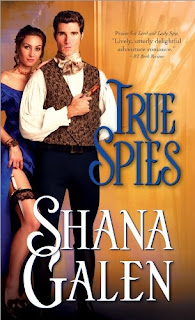 Elinor paced the vestibule of her London townhouse, her slippered steps echoing in the strained silence.

Lady Elinor is bored and fed up with her husband's disinterest in her after years of managing her household and children on her own.  When her husband doesn't show up in time to accompany her to a party, she decides to attend alone in a bold red dress that leaves little to the imagination. Yearning for a little excitement, she is already finding herself intrigued by the advances of a man who is trying to lure her to bed by fabricating an elaborate story about being a secret agent.  Will she give in to an affair for the sake of adventure? What will happen when she discovers the truth about her husband?

Lord Keating is weary with life as a spy but the Barbican group's deadly enemy has already taken out half a dozen of their people.  With one last mission to finish before he retires, he unexpectedly discovers that not only is his wife no longer interested in him, she's on the verge of an affair and so eager to do something different and meaningful that she will happily set herself in the path of danger.

When a faltering marriage and a sinister threat collide, passions flare.

I read Shana Galen's books for the action scenes and this was no exception.  I enjoyed the spy story within the larger romantic theme, loved the spy scenes and was satisfied with the denouement.  I also liked the fact that Elinor wasn't described as perfect and beautiful.  She was a woman who had blossomed (in her 30s, I think?) and her husband was surprised because he'd paid her so little heed for such a very long time.  I was one of those women who briefly went from duck to swan in my 30s so I did think that made sense and I appreciated reading about a heroine whose looks weren't ridiculously perfect.

What did you dislike about True Spies?

I really hate graphic sex, so it's important to read my thoughts with that reality in mind.  I saw a quote about that, today, actually:


I've always preferred the implied sex scene anyway, because having it spelt out always seems a bit tacky.

Mr. Cavill is referring to movie roles, but that quote struck me as similar to my thoughts about graphic sex scenes in novels. I don't know about the word "tacky" but it's a personal preference, obviously. I prefer action and plot to relationship (external vs. internal, blah, blah).  I keep coming back to Shana Galen's books, though, because they're adventurous enough to please me.  Of course, True Spies is Historical Romance -- I knew what I was getting into.

In this case, I did find it a little difficult to buy into both storylines, a bit.  Winn (Lord Keating) didn't marry for love, sired two girls and has always been cold and distant.  It was hard to define the line between lust and love on his part.  I just couldn't accept that he "fell in love" with his wife so quickly and I thought Elinor should have resisted him longer.  It would have been more interesting if there had been more personal interaction before they started ravishing each other and I would have preferred a bit more fun with the pretend spy trying to lure her to bed before he was removed from the picture, although that was pleasingly wrapped up.

Also, Elinor was sharp but when she wanted to become involved in the Barbican group its leader said she was a natural.  It appeared to me that she was more natural at thinking things through than participating in the dangerous undercover side of the work. Unlike "Saint" (the female lead in Lord and Lady Spy), Elinor never seemed entirely prepared for the job.  I kept trying to imagine what on earth her plan was to deal with her voluminous skirts when under attack.  That's pretty relevant in action scenes that take place during the Regency time period. To be fair, she had little time to prepare and minimal training but managed to hold her own (Regency Girl Power!)

There were a lot of fun scenes in True Spies.  I like the opening, when Lord Keating is running from the bad guys across a rooftop in London and the scene in which Elinor is trapped in a brothel.  And, the scene with the Prince Regent, when a number of spies are trying to save his life but he's more interested in the fact that they might hurt the pretties lying about the room.

Recommended particularly to fans of historical romance.  Not my favorite of Shana Galen's books,  but I enjoyed True Spies.  In spite of the fact that the book is heavier on romance than action,  I absolutely loved the spy bits and that's what kept me reading. Galen's action scenes rock.  I gave True Spies a 3.5/5 rating at Goodreads.

Past reviews of Shana Galen's novels:

I received a copy of True Spies from Sourcebooks in return for an unbiased review.