Bringing Out the Dead by Joe Connelly - book and movie 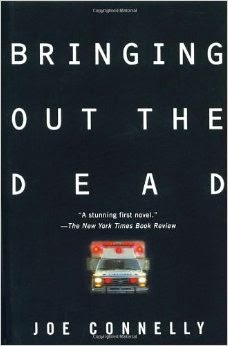 At night the walls went up and the gates came down and the fear chased everyone inside, except for those who spread it, those it caught, and those, like me, brought in to witness.

Bringing Out the Dead by Joe Connelly is a backlist book, published by Vintage in 1998. I've had it on my shelf for so long I don't remember where or when I acquired it; but, my recent paramedic reading binge had me thinking I should give it a go. And, wow, am I glad I did. As in any book that describes emergency medicine, there are a few graphic scenes that may turn a stomach or two, but Bringing Out the Dead is just . . . it's deep, man.

Frank Pierce's first three years as a paramedic were oddly magical, but now he's burned out. He's been a paramedic working in New York's Hell's Kitchen for a private ambulance service long enough that the ghosts of those he couldn't save follow him everywhere. A young asthmatic teenager named Rose is particularly tormenting Frank, who was unable to intubate her before it was too late. He calls her, "The girl I helped kill". And, a man who should have died but whose heart Frank restarted because he had no choice but to keep doing CPR until the doctor gave approval to stop haunts him. Burke's body is shutting down; he will never return to consciousness and Frank knows it, the doctors know it. But, the family doesn't understand, so every time the man's heart stops the doctors and nurses must resuscitate a man who is never really coming back.

Frank's wife has left him, his boss keeps promising to fire him but won't because the service is short-handed, and Frank is oddly mesmerized by Burke's daughter, Mary, although he knows the good news she desires will never come. What will happen to Frank?

I read a few reviews when I finished reading Bringing Out the Dead and I have to agree with the people who said it's less a book with a definitive plot than a "slice of life". The reader accompanies Frank, feels his pain, watches him treat his patients and sees his ghosts, observes as he drinks himself into oblivion and then, when Frank takes a risk for a patient whom most might think undeserving of life, observes the moment when Frank thinks he is going to die on the job and . . . well, has an epiphany, I guess you could say.

I love the fact that as the book progresses you realize that Frank's not just losing his mind and addicted to alcohol for the sake of killing the pain, he's also addicted to his job.

What I loved most about Bringing Out the Dead:

The dark humor, the theme about learning to live with your ghosts, the peek into the emotional aspect of a job that is stressful, worked mostly by people who are both adrenaline seekers and deeply caring individuals. That second quote, above, is so profound. Sometimes all they really can do is bear witness.

Highly recommended - This book absolutely would not let go of me. I finished it and went straight into a whopper of a slump. Beautifully written, deeply affecting, sometimes graphic and more than a little scary, Bringing Out the Dead is about burnout, addiction and learning to live with the things that haunt you (equally applicable to paramedics and the rest of us, thematically). You will come out of the reading feeling a little nervous about whether or not the people charged with keeping you alive are okay because pretty much all of the characters in Bringing Out the Dead are a little crazy. But, it will also make you think about life and death and where the medical establishment should draw the line when it comes to resuscitation. 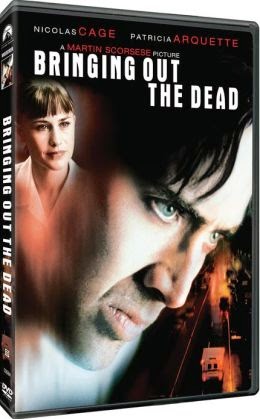 Of course, I had to see the movie version of Bringing Out the Dead. I like Nicolas Cage; he's one of those actors who does crazy and depressed, hysterical and suicidal equally well. He was, in fact, excellent as Frank Pierce and I liked the movie. Since I'd read the book not long before I watched the movie, I recognized lines that were taken directly from the pages of Connelly's book and knew when things were altered.

I was disappointed with the ending of the movie. In the book, the final scene is metaphorical. It explains -- through something that can't possibly really happen -- that Frank has decided that in order to go on he must live with his ghosts rather than fight them. It's a stunning scene and it's not in the movie. The ending of the movie is okay; it's just not as meaningful. Still, I liked the movie and I'm glad I watched it. But, it's the book I'll return to. Even as I was reading Bringing Out the Dead, I was thinking about how much I'd like to reread it in the future.

Interesting side note: Joe Connelly had only one other book published. Bringing Out the Dead was a bestseller; Connelly's second book was a flop. In fact, I can't find any information about Connelly at all, beyond a Wikipedia entry that tells absolutely nothing about what's become of the author since the publication of his second book. I hope he's alive and happy and writing poetry on a beach, somewhere.

©2014 Nancy Horner. All rights reserved. If you are reading this post at a site other than Bookfoolery  or its RSS feed, you are reading a stolen feed. Email bookfoolery@gmail.com for written permission to reproduce text or photos.
Posted by Bookfool at 10:35 PM