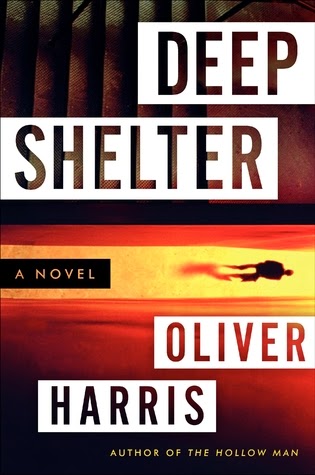 Belsize Park had continental pretensions and only a few weeks of sunshine a year to exercise them.

~ p. 14 of Advance Reader Copy, Deep Shelter (some changes may have been made to the final print version)

Belsey descended five steps, then ten, then committed to reaching the bottom. He followed the torch beam, timing his descent. The blood-like smell of rusting iron and damp stone grew thicker. He felt he was being swallowed -- that it was no longer curiosity driving him but some form of peristalsis. The shelter nourished itself on over-curious detectives.

I can have this moment, Belsey thought. He felt he'd overcome several insurmountable laws, of time as well as morality. He inhaled the peace, dragging it deep into his lungs. This was what corrupted: peace and quiet. It was what secrets fed off, growing inside you.

I'm going to skip Monday Malarkey for the next couple of weeks in the interest of keeping up-to-date as I read (which doesn't guarantee that I will; nevertheless, I will endeavor to do so). I haven't gotten any books in the mail, anyway, and my reading is still leaning slumpish.

Deep Shelter by Oliver Harris salvaged my last reading week by keeping me engrossed and busy googling various bits of information for days. The second in the Nick Belsey mystery series, Deep Shelter follows detective Belsey into underground London. Nick is just about done with his shift when a BMW shoots past him at high speed. He takes chase but loses the suspect at a dead end where an oddly-shaped building piques his curiosity. When he finds out it's the entrance to a bomb shelter from WWII and discovers contraband hidden far beneath the surface, Nick brings a date to the shelter to impress her. But she wanders off and disappears, kidnapped in a labyrinth of underground tunnels.

Because he has a background as a troublemaker and there is a clear trail that leads to Belsey as the prime suspect in her disappearance, he knows he must find Jemma on his own or face certain arrest.

Determined to discover who else is down in those forgotten tunnels, and how far this secret network of underground passages extends, [Belsey] plunges headfirst into the investigation -- and into a dangerous game of cat and mouse with a ruthless enemy who would rather let an innocent woman die than reveal old Cold War secrets hidden deep beneath the city's streets.

Holy Toledo, what an entertaining and complex read. I adore London (it's my favorite big city) so I absolutely loved the sensation of being dragged around the city by Nick Belsey, both on and below ground. The WWII and Cold War historical connections in the book and various buildings mentioned by Belsey kept me busy googling. In fact, there was so much about Deep Shelter that I felt obligated to investigate further that it probably took me twice as long to read as a typical mystery.

If you're a regular Bookfoolery reader, you already know I burned out on mysteries long ago and seldom read them. There has to be something special about them to lure me into continuing on. In this case, there is only one other Nick Belsey book and you can consider me hooked. I will be looking for a copy, soon, and anxiously awaiting future releases by Oliver Harris.

I did think Deep Shelter was a bit long; but, to play devil's advocate with myself, I can't think of a single scene that I'd have removed. I also thought it would have been nice to have a cast of characters and a glossary of terms at the end of the book. There's a fairly large cast and, at least from an American perspective, a few abbreviations that it would have been nice to have defined for convenience, although it helps if you're aware that "Ministry of" often can be substituted for "Department of" in British English. The U.K. audience will have likely had no trouble with terminology. Again, I made liberal use of Google. So my few criticisms are mild ones.

Highly recommended - Wonderful setting and atmosphere, unique historical background, and a character with unusual flaws combined with solid writing make Deep Shelter an excellent read. Nick Belsey's not a bad man; he's just quick to bend to temptation when it presents itself. So, he's a slightly dirty cop but in a palatable way. I'm quite fond of him and looking forward to reading the first book in the Nick Belsey series, The Hollow Man, as soon as possible.

My copy of Deep Shelter was provided by Bourbon Street Books in return for an unbiased review. Deep Shelter was released in the U.S. in September of 2014 and in Great Britain earlier this year. Many thanks to Oliver Harris for a refreshing, slump-breaking read.

©2014 Nancy Horner. All rights reserved. If you are reading this post at a site other than Bookfoolery  or its RSS feed, you are reading a stolen feed. Email bookfoolery@gmail.com for written permission to reproduce text or photos.
Posted by Bookfool at 12:01 PM