January of 2015 was a little unusual in that I deliberately slowed down my reading to try to make some life changes, so it was a very light reading month. But, since I've continued to set aside any book that doesn't immediately grab me and hold on, it was also a very good reading month. Quality came in high, quantity low. I'm happy with that.

You already know about the planting we did, if you read my Monday Malarkey post. I'm so excited about my garden; I can't wait till I have blooming things to photograph.

Apart from reading and planting, Huzzybuns and I went on an adventure with friends, visiting a scale model of the Mississippi River built during WWII by German POWs. There is no museum. Most of the buildings have crumbled away; you must slog past a barrier and know where you're going to find the site. But when you do, it is mind-blowing -- the size of the model and depth of detail are amazing (upper right photo, below). 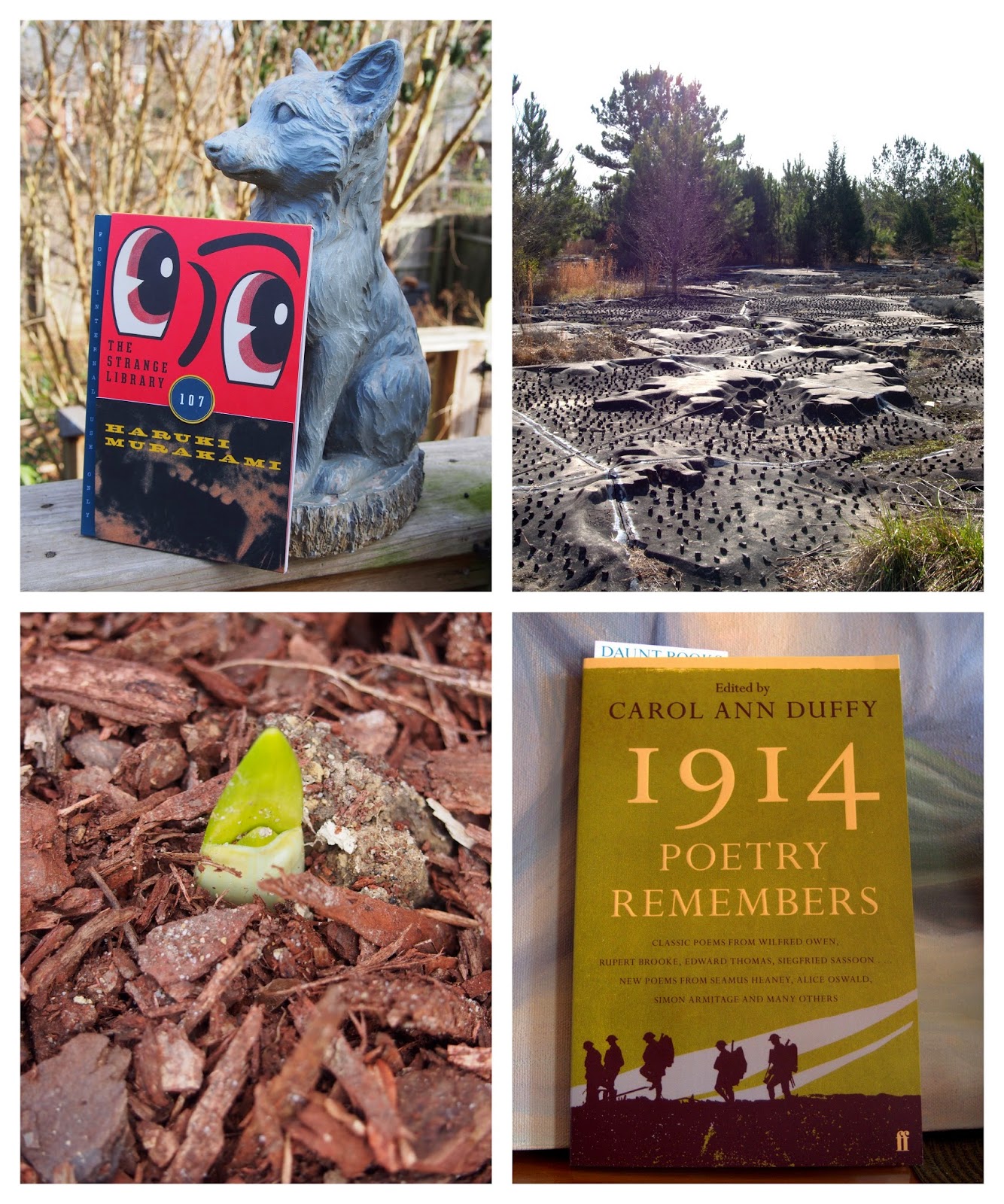 January 2015 Reads in Review (links to mini reviews, where applicable):

1. Soviet Ghosts by Rebecca Litchfield - Photos of abandoned Soviet buildings bought primarily to use as story starts. I liked this a lot but did not love the text, which was all about the history of the Soviet Union and its downfall. The author used some form of the word "ideology" so constantly that seeing the word began to feel a bit like fingernails on a chalkboard. Soviet ideological this, Soviet ideology that. Kind of oddly preachy, really. What I really wanted to know was where each of those photos was taken, what the history of the building was, why it was abandoned, etc. That info was in the back of the book but I didn't know that till I got there. Irritating. I mostly bought it for the photos, though, and I do like them.

2. 1963: The Year of Revolution by Robin Morgan and Ariel Leve - A surprisingly informative book about the "youthquake" that occurred in 1963. Poorly organized and chaotic. If you weren't old enough to know many of the people interviewed (true for me), some of the point is lost unless you spend time looking up people, the art they created, videos of music, etc. I did that and it took forever to get through but in the end I found that the reading ended up being an experience because of all the time I spent immersing myself in 1963. So, I ended up loving it.

3. I Love You Near and Far by M. Blain Parker and J. Henry - A children's book about loving a child from a distance when relatives can't see little ones in person. Although the book wasn't quite what I hoped for, I liked it and hope to review it soon.

4. Entertaining Judgment by Greg Garrett - Nonfiction about how the afterlife is portrayed in fiction, film, games and literature. Loved it. I've never read anything quite like it. Greg is an Episcopal priest. He remains neutral, in spite of his personal beliefs, and goes beyond the Bible when comparing religious texts to fictional portrayals.

5. Little Heathens: Hard Times and High Spirits on an Iowa Farm during the Great Depression by Mildred Armstrong - A memoir of the author's life during the Great Depression. I must emphatically dispute her use of the words "hard times". The author's huge extended family banded together so there was no lack of support, in spite of the fact that her father was out of the picture. They moved between her grandparents' farm (one of their farms -- they were debt free) and a house in town. They had livestock, orchards, gardens. They only real hardship was dealing with the cold because the two homes were not fully heated but they were so well fed that most of the book is about food and it's loaded with recipes. Charming and sometimes funny, but occasionally preachy. A fun read.

6. The Strange Library by Haruki Murakami - A truly bizarre story about a boy who goes to his library, asks for some obscure titles and is sent down into the depths of the library, where he encounters a man dressed as a sheep and some other strange people who may or may not be quite what they seem. Loved it. Still not sure whether it's a children's book or a novella. Everyone seems to have a different opinion.

7. North of Boston by Elisabeth Elo - After surviving an accident at sea, the heroine (whose name I love: Pirio) goes in search of answers. I didn't find this book overly fast-paced, as thrillers go, but I did find it fascinating. I liked Pirio and the characterization in general; loved the denouement.

8. 1914: Poetry Remembers, ed. by Carol Ann Duffy - War poetry and some writings from WWI; a mixture of WWI and modern poetry. Extremely moving, passionate, brutal and heartbreakingly beautiful with one exception: I couldn't make heads or tales of Gertrude Stein's poem.

9. Wonderstruck by Brian Selznick - Parallel stories about 2 deaf children, one in 1920s New York, the other from . . . um, I forget. Montana? Minnesota? Love the illustrations and the way their stories intersected, although Wonderstruck isn't as magical as The Invention of Hugo Cabret. Still, it's a keeper. Brian Selznick's illustration is stunning, his stories beautifully told, the combination a beat apart.

10. A Dozen Cousins by Lori H. Houran and Sam Usher - A children's book about a girl who has, literally, a dozen cousins, all boys. In rhythmic verse she tells about their antics and how she loves her cousins in spite of the fact that they can be a nuisance. I absolutely love this book. I smiled all the way through the reading. I need to take some interior photos and review this one, soon. I'm looking forward to someday reading it to my granddaughter.

©2015 Nancy Horner. All rights reserved. If you are reading this post at a site other than Bookfoolery  or its RSS feed, you are reading a stolen feed. Email bookfoolery@gmail.com for written permission to reproduce text or photos.
Posted by Bookfool at 6:01 AM

Email ThisBlogThis!Share to TwitterShare to FacebookShare to Pinterest
Labels: 2015 Reads, One Month's Reads in Brief