Even if the Sky Falls Down by Susan Jackson Bybee, a DNF, and an Internet-Free Month 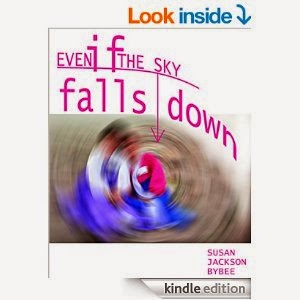 I'm getting ready to go on a month-long break from the Internet, but I can't bear to leave without first talking about Susan Jackson Bybee's book, Even if the Sky Falls Down. I knew Susan as just "Bybee" at her blog, formerly called Naked Without Books but recently changed to Blue-Hearted Bookworm, for years before I finally got to know her as Susan at Facebook. And, I watched from the sidelines as she wrote during National Novel Writing Month. But, wow . . . I didn't expect her to edit and publish a book within just a few months! I had no idea what she was writing, much less that it would turn out to be one of the best stories I've read so far in 2015.

Thirty-something American Lily Thompson is enjoying her life as an English teacher in a private kindergarten in Seoul, South Korea. When she breaks her ankle and loses her job, her handsome recruiter finds her a new position in the Korean countryside, teaching English to elders at a senior center. Lily is unsure how she'll relate to students at the other end of the age spectrum, but things are not quite what they seem. Charged with documenting the memories of an eclectic range of elderly people sends Lily on a journey revealing unique insight into both Korea's troubled social history and her own life.

You have got to read this book. Even if the Sky Falls Down (link leads to Amazon) is currently available in e-book and it's so good I hope someone will "discover" Susan and publish it in paper form, someday.

I love the way Lily's faced with not one but several changes and conflicts in the book. Can she cope with the change from teaching young children to giving lessons to the elderly? How will she deal with the ghost of her past who has returned to haunt her? Will she ever learn to speak Korean?

As the elderly people at the senior center begin to dictate their stories and Lily gets to know them, you see the marvelous transition of Lily from a young (30-something) woman running away from her past to a woman who is happy and secure in her present. But, what I most love about Even if the Sky Falls Down are the personal histories dictated by the elderly people, which are interspersed within the present-tense story of Lily. They are so believable that I found myself wondering how on earth Susan came up with all those stories. Did she actually interview people? Are they similar to stories she's heard while living and working in Korea? Did she pick some historian's brain? It doesn't matter. What matters is that the book has that unusual ring of truth that makes a book really stand out.

Highly recommended, and not just because I like Susan (although I do). Unlike a lot of self-published books, Even if the Sky Falls Down is almost completely devoid of errors; it's about the cleanest text I've ever seen in a self-pub. I'm impressed and I can't wait to see what Susan comes up with next. 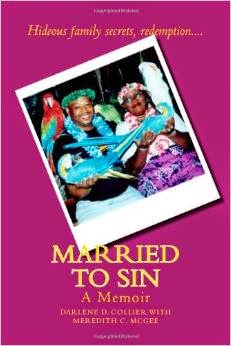 Married to Sin: Hideous family secrets, redemption was dictated by Darlene Collier (whom I'll refer to as the "author") and written by Meredith McGee, who has also written a book about James Meredith that I hope to read soon (James Meredith was the first black man to attend the University of Mississippi). I met Meredith McGee at the meeting of a local writers group that I attended, last week, and she gave me a copy of Married to Sin after I mentioned the fact that I'm a book blogger.

I thought Married to Sin started off quite well. There's an authenticity to the voice of Darlene Collier that comes through very nicely and I found her family history fascinating. One of her ancestors bought a large chunk of land in Mississippi after slavery ended and the family is still earning income off that land. But, Darlene's mother died quite young and after her hard-working grandfather died from injuries received in a tragic accident, she and her siblings were left with a father who drifted in and out of their lives, seldom working, and a grandmother who was diabetic, hid food from the children, and stayed in a chair all day. The children eventually were sent to a home for many years, then lived with relatives for a short stretch, and Darlene was still very young when she married.

Here is where I began to have trouble with the story. The author was (and is) married to a serial abuser but she never attempted to leave him, sticking around in spite of hardship. I would admire her for her tenacity if I didn't know she's a classic abuse victim, always letting the man back into her life no matter what horrors he has inflicted upon her. There were other people in the family who caused trouble and one of them raped her daughter for years before he was finally caught in the act. This was the point at which I closed the book: when the man who raped her daughter begged Darlene not to send him to prison and she dropped the charges. I've read about abuse in the past and I can understand falling prey to an abuser and having difficulty getting away, but letting your daughter's rapist off the hook? That, I cannot respect. I couldn't bear to read any farther. I made it 83 pages, which is close to halfway, but was tempted to give up sooner. Lots of errors in this one, another self-pub.

Last but not least - break time!

I'm taking off the entire month of March from the internet -- not just the blog, but social media, as well. I'll only be checking e-mail. This is a last-minute decision, although you already know I've been thinking about taking an extended break for some time if you're a regular reader at Bookfoolery. I started out my writing year well in January but lost the thread in February, so I feel like it's necessary to get myself back into a routine. But, I also just like to step away, now and then, and we're moving into the best part of the year, when it's still cool enough to do outdoor work and the pollen hasn't begun to peak. Hopefully, ditching distraction will allow me to enjoy the best time of year more fully, as well.

I hope you all have a fabulous month. Happy reading!


©2015 Nancy Horner. All rights reserved. If you are reading this post at a site other than Bookfoolery  or its RSS feed, you are reading a stolen feed. Email bookfoolery@gmail.com for written permission to reproduce text or photos.
Posted by Bookfool at 9:34 PM