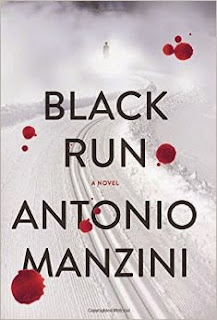 Black Run by Antonio Manzini
Released in the U.S. in April, 2015 (formerly published in Italy)
Published by Harper
Mystery/Crime Novel

Black Run is the first in a series of mysteries by an Italian author, featuring the crime-fighting skills of Deputy Police Chief Rocco Schiavone, a detective who has been banished from Rome and now works on a small police force in the Italian Alps.

In the small town of Aosta, a man has been run over by a snow cat preparing the ski trails for the next day. The body is so badly damaged that it's a challenge to even locate all the pieces but the coroner and Schiavone quickly find enough evidence to prove that the victim was murdered. With very little to go on and a pushy magistrate and police chief who want answers quickly, Schiavone puts his skills to work.

There are some interesting details to the mystery and I absolutely loved the setting but I found the writing a little stiff and Schiavone unredeemably nasty. In some ways, he reminded me of British author Oliver Harris' shady detective hero, Nick Belsey, but I thought Belsey (in Deep Shelter, particularly) showed glimmers of hope for redemption and some semblance of morality, whereas Schiavone is just vile. His reason for having been banished from Rome is revealed but there's no real explanation of his uncomfortable marriage, at least near as I could tell. There are hints that his wife knows everything he's done and has some compelling reason to stay with him but without any real pretense at a relationship remaining. But, her appearances are minor enough to reveal little.

The mystery itself was fairly satisfying, although I sometimes had trouble understanding how the deputy police chief came to his conclusions and I absolutely did not like the way the author dragged out the dramatic arrest toward the end of the novel.

Neither recommended or not recommended - It's notable that I'm certain I got Black Run by mistake. I'm not a big fan of mysteries and choose them carefully; it's rare for a mystery description to really grab me. I got two in the same envelope, neither of which I recalled requesting. So, I think my requests must have been mixed up with someone else's.

However, I do read the occasional mystery-slash-crime novel and I was in the mood for a change of pace. I liked Black Run for the fact that it was so very different. The setting was unique, vivid, evocative. I liked reading about the cold when I'd been outside painting in the heat. It was refreshing. Also, during the time I was reading Black Run, I had vivid dreams of mountains and bickering Italians, which was surprisingly fun in spite of the fact that they were nightmares. I disliked the detective enough that I doubt I'd read another book in the series but I don't regret the time spent reading Black Run so I gave it an average rating. I would particularly recommend the book to mystery readers who don't mind a particularly dark and slimy protagonist.


©2015 Nancy Horner. All rights reserved. If you are reading this post at a site other than Bookfoolery  or its RSS feed, you are reading a stolen feed. Email bookfoolery@gmail.com for written permission to reproduce text or photos.
Posted by Bookfool at 12:03 PM

Email ThisBlogThis!Share to TwitterShare to FacebookShare to Pinterest
Labels: Antonio Manzini, crime novel, Harper, neither recommended or not recommended, series