Our Souls at Night by Kent Haruf 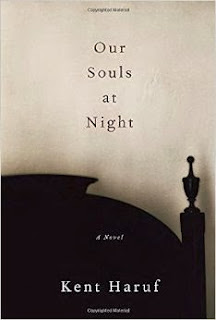 Addie Moore and Louis Waters have a few things in common. They're elderly, their spouses have died, and they're both lonely. But, Addie has an idea. Would Louis be willing to come to her house to sleep with her? She's not interested in sex, just companionship. Nights are the hardest time to be alone.

Louis is taken aback at Addie's proposal but he's open to the concept. On the first night, he shows up at Addie's back door with his pajamas and toothbrush in a paper sack. Addie fearlessly tells him she's too old to worry about what anyone thinks of his presence.

So begins Our Souls at Night. It's an interesting concept -- two elderly people who spend their nights together to stave off loneliness. What will happen? Will the neighbors be shocked or understanding? Will Addie and Louis get along and become friends or find each other annoying? What will their children think? How will they handle the arrival of Addie's grandson?

Our Souls at Night is a quiet, surprising novel. I've never read Kent Haruf's writing but I've been curious about it for quite some time. I like the Colorado/Nebraska plains in which his books are set and I've heard his stories are gentle and thought-provoking, yet I went into the reading totally blind. I had no idea where he was going to take me and the book surprised me all the way through. As Addie and Louis get to know each other they encounter some very believable obstacles, share their fond memories, regrets, fears and the simple joys of everyday life.

Highly recommended - A tender, surprising, plain-spoken story about unexpected friendship, family, loneliness and small-town life that is lovely and bittersweet. I'll definitely read more of Kent Haruf's writing. The only things I really didn't like about the book were the fact that it was a little too painfully close to reality at some points and the lack of punctuation in dialogue, a style I dislike because it often makes it difficult to tell who's talking.


©2015 Nancy Horner. All rights reserved. If you are reading this post at a site other than Bookfoolery  or its RSS feed, you are reading a stolen feed. Email bookfoolery@gmail.com for written permission to reproduce text or photos.
Posted by Bookfool at 4:32 AM