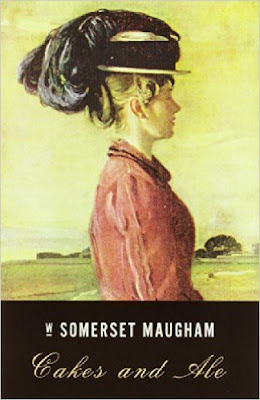 Hypocrisy is the most difficult and nerve-racking vice that any man can pursue; it needs an unceasing vigilance and a rare detachment of spirit. It cannot, like adultery or gluttony, be practised at spare moments; it is a whole-time job.

I stopped him. 'Edward,' I said. He looked startled. For a moment I could have sworn he did not know who I was. 'What avenging furies urge you with such hot haste through the rakish purlieus of Pimlico?' I asked.

Cakes and Ale by W. Somerset Maugham is my third read by Maugham and my second classic read for 2016.

Told in first person, Cakes and Ale tells the story of how the narrator met now-famous and deceased author Ted Driffield when he was a boy and Driffield was married to a disreputable former barmaid, Rosie. Rosie was known for carrying on with just about anyone. The narrator, a writer himself, is asked by his friend Roy to share all he knows about Driffield to help fill some of the gaps in his knowledge about the author after the second Mrs. Driffield has asked Roy to write her husband's life story. But, neither Roy nor the second Mrs. Driffield want Roy to bother mentioning Rosie, the first Mrs. Driffield. So, the narrator recalls the truth of what he knows about Rosie.

Cakes and Ale jumps back and forth in time a bit, which can be a little confusing, and the ending is abrupt. But, I thought it was excellent. Rosie is a scandalous character but charming, as well. The narrator was entranced with her from his boyhood and, having spent a great deal of time with the Driffields over the years, understands her like no other living man. The book winks at the reality of how inaccurate a biography can be, based on the way an author chooses to portray his subject. By skipping past the years with Rosie, Roy has chosen to ignore the heart of how Driffield's characterization emerged. But, because the narrator of Cakes and Ale has secrets of his own, he doesn't go out of his way to correct Roy.

I noticed that the copyright page indicates that Cakes and Ale was originally entitled Skeletons in the Closet, a much more apt title because that's exactly what it's about -- the hidden events of both the author's and narrator's lives that are kept from view but which inform their lives.

In fact, I never could figure out quite where the title Cakes and Ale might have come from. Rosie is a former barmaid and Driffield liked to hang out at an unfashionable public house in his younger years, so I suppose that could be the origin of the "ale" in the title. But, the only time I recall reading anything about cakes was in the odd scene involving tea and cakes. There is one particular scene in which the narrator is persuaded to go to tea at the home of a woman whose influence can make or break an author. That scene took place after a crucial moment in the book (I don't want to give away the plot point) and the narrator had been working all day. He was extremely hungry but because he arrived late for tea, his hostess assumed aloud that he probably didn't want anything and the poor narrator sat there, hungry and thirsty, while she nibbled on the leftovers. That was a particularly irritating but telling scene, showing that many of the narrator's crowd thought it was perfectly fine using his friendship with Driffield for selfish purposes, so he was equally justified in sharing just enough to satisfy them.

Highly recommended - While I wouldn't call Cakes and Ale my favorite Maugham, it is nonetheless an excellent read that starts out slowly and gradually becomes more compelling. Rosie, in spite of her flaws, is a delightful character.

©2016 Nancy Horner. All rights reserved. If you are reading this post at a site other than Bookfoolery  or its RSS feed, you are reading a stolen feed. Email bookfoolery@gmail.com for written permission to reproduce text or photos.
Posted by Bookfool at 10:33 PM