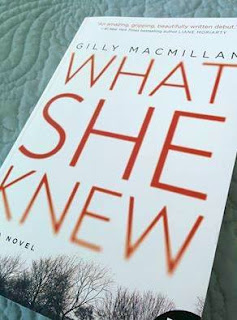 What She Knew by Gilly Macmillan is December 2015 release from HarperCollins that tells the story of a child's disappearance, the way the mother becomes a public scapegoat when she does a poor job of appealing to the public for help finding her son, and how a detective develops insomnia and other issues after he thinks he's made a terrible mistake.

Rather than using a single narrative, author Gilly Macmillan tells the story of 8-year-old Ben's disappearance through mother Rachel Jenner's viewpoint, along with the transcripts of the detective's sessions with a psychiatrist and articles and comments on social media. She does a pretty terrific job of showing how easily a person can be tried by the jury of public opinion and how appearances are not always what they seem.

Having said that, What She Knew was just a so-so read for me and I think that is almost entirely down to timing. The story didn't grab me until I reached about page 150 (out of nearly 500 pages) so I should have probably put it aside. I also admit to being so worried that the child was going to turn up dead that I kept putting off the reading. It does not bother me at all to flip to the end of a book if I'm worried it's not going to turn out the way I'm hoping; I have no idea why I didn't bother just doing that (apart from the fact that I had a migraine most of the week), but eventually I got over myself and the pace picked up. I didn't love the ending but I won't tell you why because it's a spoiler.

Recommended but not a favorite, probably due to bad timing - In spite of the fact that I never did fall in love with What She Knew, I can tell you that there were moments that I really appreciated the depth of emotion portrayed by the author and I thought the use of social media and the way people make judgments without knowing all the facts is timely. I've talked to several friends who found the book a very fast-paced read so I want to reiterate the fact that I think it was just bad timing for me.

Total unrelated note:  I completely forgot to put links to last week's reads in my Monday Malarkey post, yesterday. The post has been updated and republished to fix that error.

©2016 Nancy Horner. All rights reserved. If you are reading this post at a site other than Bookfoolery  or its RSS feed, you are reading a stolen feed. Email bookfoolery@gmail.com for written permission to reproduce text or photos.
Posted by Bookfool at 11:01 AM

Email ThisBlogThis!Share to TwitterShare to FacebookShare to Pinterest
Labels: Gilly Macmlllan, recommended but not a favorite, suspense, William Morrow