Monday Malarkey - Arrivals and posts and plans and such

Happy Monday! I had a good blogging week and a so-so reading week. How was yours? 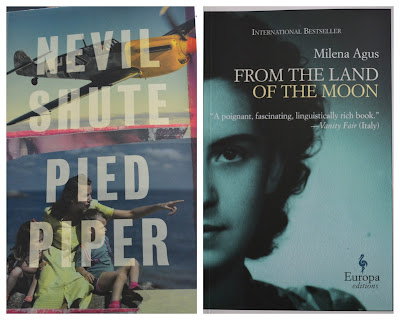 
I was reading a little about Nevil Shute when I went to look up some of his books on a whim and, I confess, I bought a new copy of Pied Piper solely because I love the cover. It's an old enough title that I would have gone for a used copy, otherwise. I bought Come Away With Me because of some gushy comments I read (and because it sounded good). And, From the Land of the Moon is probably the last book I'll ever receive from Paperback Swap. When they abruptly began charging a subscription fee, last year, I still had over a dozen credits I wasn't willing to give up so I paid to keep going. It took almost the entire year to use up my remaining credits. I think a lot of people must have abandoned PBS due to the fee because the books were offered much slower in 2015 than the year before. At any rate, I'm totally out of credits, now.

Dispatches from Pluto by Richard Grant - This was my F2F group's choice for January and I think I've mentioned I missed the meeting. I decided to go ahead and finish, even though I found the reading uncomfortable. There are some interesting anecdotes about the challenges of living in a plantation home and I particularly loved reading about the author's Delta wedding, toward the end of the book, but much of the focus is social commentary on racial interaction, poor schools, crime, drugs, corruption -- all the seedy yucky things about life in Mississippi. To be honest, I found it pretty depressing and I don't feel much like writing about the book. So, this paragraph will serve as the entirety of my review.


I also finished From the Land of the Moon by Milena Agus, last night. It's a slim volume and since last week's reading dragged, I wanted a quick read to make me feel a little better about finishing up the month.

In keeping with my goal to read at least one classic per month in 2016, my February choice is Cakes and Ale by Somerset Maugham. I'm kind of a Maugham fangirl, so I'm really looking forward to this one.

I've learned a few things about cat stress, this week, thanks to the fact that the cats are still occasionally growling and hissing at each other. Most of the time they're fine and dandy and they got a clean bill of health, but something is eating Fiona. The vet told me a study was done that showed cats can be stressed by other felines in close proximity, even if they don't interact with them. They determined this by removing 20 stressed-out cats who were in the same apartment building but not living together to separate homes in the country (still indoors), where they became more relaxed and were cured of bladder infections without having to take antibiotics. Fascinating.

I also discovered that puzzle feeders can be a stress reducer. I don't have any puzzle toys but I may try to make one. I did know that giving cats the ability to climb helps. Mine, of course, have quite a nice cat tree but they haven't perched in it, lately; they've just climbed up and down and used the scratching bits. I've got a couple of boxes lying about so I'm going to also try to build them a little castle. If I don't cut a finger off and it looks decent I'll share a pic when I'm done. Pray for the safety of my digits, please.

©2016 Nancy Horner. All rights reserved. If you are reading this post at a site other than Bookfoolery  or its RSS feed, you are reading a stolen feed. Email bookfoolery@gmail.com for written permission to reproduce text or photos.
Posted by Bookfool at 9:32 AM