My Story That I Like Best, ed. by Ray Long

The cover of this book is pretty boring, so I took a photo of the title page: 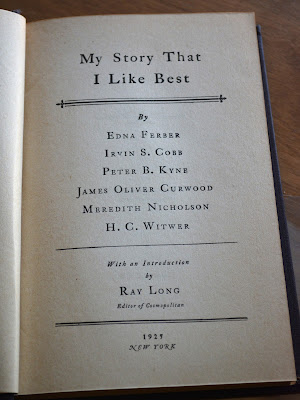 My Story That I Like Best was published in 1925 (my copy is a 1927 reprint) and edited by Ray Long, who was the editor of Cosmopolitan magazine during the years that it was a literary magazine. Edna Ferber is the only author I'd heard of when I picked the book up and flipped through it at Off-Square Books in Oxford, MS, but just a random sampling (what I like to call the "flip test", where I flip through and read a few passages) was enough to tell me the quality of writing was excellent, so I bought it.

Before each story, there is a section with a photo of the author and a little about the story, the writing process, and why a particular story was chosen. The authors must have been asked to respond to a particular set of questions because all of the introductory writings contain the same attributes, but of course the responses are varied. Here's Edna Ferber's comment about how she came up with her story ideas:

And, here's what Meredith Nicholson had to say: 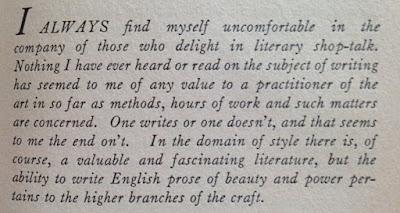 "The Gay Old Dog" by Edna Ferber - A man reluctantly makes a death-bed promise to watch over his sisters, altering the rest of his life.

"The Escape of Mr. Trimm" by Irvin S. Cobb - A banker on his way to serve 12 years of hard labor for breaking, "one way or another, about all the laws that are presumed to govern national banks" finds himself unexpectedly freed by the derailment of the train he's on. Declared dead, he thinks he's got it made but there's one small problem: he can't remove the handcuffs from his wrists.

"Point" by Peter B. Kyne - When unhappy former dog trainer turned farmer comes across an unexpectedly talented point dog, he enters the dog in a competition and finds that he still has a knack for his true love.

"Kazan" by James Oliver Curwood - A quarter-strain wolf dog named Kazan, who has been taken from his home and his wild mate, Gray Wolf, by an evil man, yearns to return to his home territory and his blind mate.

"The Third Man" by Meredith Nicholson - A bank president invites ten of his "cronies" to dine with him at his club, intending to secure their help in identifying a murderer by luring him into doodling on a notepad.

"Money to Burns" by H. C. Witwer - Bellhop Jimmy Burns sneers at the wealthy hotel patrons who live the high life but give him a pittance for tips, talking of the big things he'd do if he were to have a share of their money. But, when a switchboard operator's rich boyfriend agrees to loan Jimmy $25,000 as an experiment to see how he'll handle it, things don't turn out quite the way Jimmy imagined.

Highly recommended - When I closed My Story That I Like Best, I thought, "I don't want to read anything modern, ever again." The quality of writing is stellar and I will undoubtedly return to this book. Although I had only heard of the one author, all 6 were quite famous in their time and one of them, James Oliver Curwood, was actually the highest-paid author in the world at the time of his death. You can still visit the castle he built. I think my favorites were "The Gay Old Dog" and "Kazan" by Curwood. Curwood's writing has been compared to that of Jack London and movies have been made from his work, even in recent decades. "Kazan" is absolutely the most moving, beautiful story of the lot and I'm going to look for the novel from which it's drawn.

My Story That I Like Best must have gone through several printings. It's readily available online and reasonably priced (for less than I paid, actually, even with added postage).


©2016 Nancy Horner. All rights reserved. If you are reading this post at a site other than Bookfoolery  or its RSS feed, you are reading a stolen feed. Email bookfoolery@gmail.com for written permission to reproduce text or photos.
Posted by Bookfool at 1:15 PM