Back to malarkey with a little pile of ARCs I got off a library cart when I got my hair cut in our former town and dropped by the library: 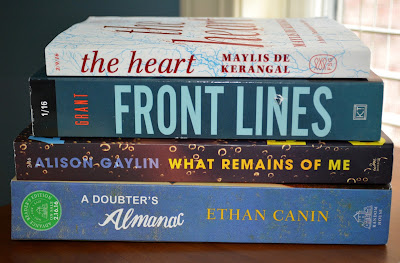 
Other books that walked in:

I can't recall what I've mentioned and what I haven't (and I'm in a hurry, so I'm not going to go back to look at previous posts) but I don't think I'd finished any of these, the last time I did a malarkey post. However, there may be some duplication.

I started posts on a couple of these before my friend's death sent me into a brief tailspin, so hopefully this will be a decent reviewing week.

You'll have to forgive me if I mention Tammy, now and then, for a while. It was such a sudden loss that I feel like it's going to take me a while to fully process it. She had been feeling bad for a while but just finally went to the doctor about 3 weeks before her death. That was followed by a large number of tests and, finally, the diagnosis literally a week before she slipped away. It makes me want to call up everyone I know to say, "Hey, you know those routine preventive tests we all tend to put off? Don't put them off.  Just don't. Go in, now." And, I'm guilty, as well, so I suppose there will be upcoming doctor visits for things I regularly avoid.

This was the best day ever: 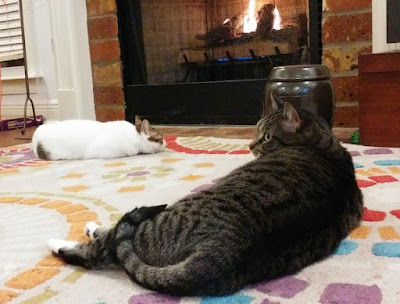 The cat fights are over! Our breakthrough came on a day that it was cold outside and both cats were eager to get close to the fire. They moved nearer and nearer each other until they were maybe a foot apart. At the time, they'd both been free (nobody locked into the bedroom or gazebo) for about 7 hours together without fighting but they did end up having a tiff a couple hours after we put out the fire.

A couple days later, we were able to leave the bedroom doors open all day and night and nobody had to go into the gazebo. I went to sleep with one cat on the bed, the other on a nearby piece of furniture that has a folded blanket on it. In the morning, I woke up to find that both cats were sleeping on the bed. The kitties have only had to be separated twice, since then. I can't tell you how happy I am that the cats have returned to living together harmoniously. Once they realized, "Hey, she's okay," they almost immediately went back to happily chasing each other and they're even back to occasionally following each other or walking side-by-side, although they haven't cuddled yet. Hopefully, that will come soon. It's so exciting to be so close to normality.

How has your week been?

©2016 Nancy Horner. All rights reserved. If you are reading this post at a site other than Bookfoolery  or its RSS feed, you are reading a stolen feed. Email bookfoolery@gmail.com for written permission to reproduce text or photos.
Posted by Bookfool at 4:57 PM