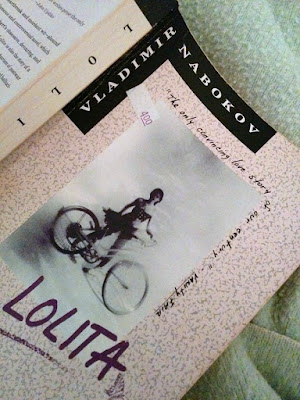 Well, there's one more classic knocked off the miles-long To Read list. When I finished Lolita, I wrote about it on Facebook and was surprised to find that it's a book everyone wants to talk about. Cool, double the reason for sticking it out.

I confess, Lolita was both a fabulous read and a miserable one. I've always been impressed with Nabokov's precision. He was such a careful craftsman, very deliberate about choosing the perfect word and with such an outstanding vocabulary. He kept me hopping -- looking up vocabulary definitions and translations for all the French phrases. I can read a tiny bit of French but clearly not enough. I enjoyed the fact that I had a used copy of Lolita that someone had already written in. Normally, I don't write in books or dog-ear. It horrifies me if I accidentally bend a cover or dampen a page. So, it was delightfully freeing to realize that since someone had already written in my secondhand copy I could write definitions and translations inside the book, guilt-free.

I presume everyone knows what Lolita is about, but I'll write a brief synopsis. Humbert Humbert is a man who is sexually drawn to pre-pubescent girls, whom he calls "nymphets". He blames his attraction to young, underdeveloped girls on his tragic first love. But, at the same time, it's clear that Humbert's aware that he's not normal and when he attempts to suppress his desires or find a substitute he only succeeds in forcing himself into either violence or psychological breakdown. Humbert marries his landlord hoping to find a way to drug and fondle her daughter but when he's widowed, he is able to take young Dolores (or "Lo" or "Lolita") on a lengthy road trip, during which he justifies using her sexually on the fact that she already lost her virginity at camp. While Lolita clearly shows signs of being very unhappy, Humbert is so clouded by desire that he doesn't realize he is destroying her.

The most difficult thing about the reading of Lolita, I thought, was reading through the eyes of such a warped human being. No matter how low he sinks, he has some sort of explanation or defense. I think in the hands of anyone else, Lolita would have been awful but, oh, Nabokov. What a brilliant writer. I have to tell you it was such a relief to read the Afterword by the author, in which he talked about how the story came to him and then haunted him, the changes he made after writing a complete first draft and destroying it, the reaction of various publishers (one of whom said, "If I publish this, we'll both go to prison,") and the understanding of how deplorable his main character was. It was nice to know the author found his protagonist as creepy as readers do.

When I rated Lolita at Goodreads, I was torn between taking off points for the icky factor or rating it on its merits alone. In the end, I couldn't bear to give Lolita less than 5 stars because you have to admit that the reason Humbert is so appalling is that he's so believable. At one point, I wanted to take an interior picture of the book and realized that every single page had some nasty thought or quote by the protagonist. No wonder I had to take a break from it about halfway. Lolita is anything but easily palatable.

Highly recommended with a cringe - Challenging to read because of both its warped protagonist and the author's stellar vocabulary, but worth reading as a lesson in crafstmanship and certainly a book worth talking about.


©2016 Nancy Horner. All rights reserved. If you are reading this post at a site other than Bookfoolery  or its RSS feed, you are reading a stolen feed. Email bookfoolery@gmail.com for written permission to reproduce text or photos.
Posted by Bookfool at 8:35 AM