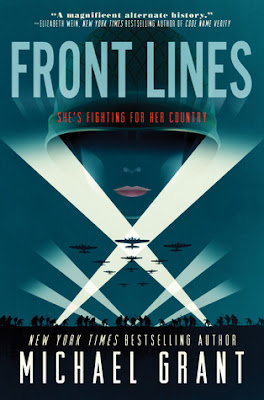 My copy of Front Lines by Michael Grant was a very lucky find. I had already put it on my wish list when I happened across an ARC on a cart at my old library.

Front Lines is an Young Adult alternate history of WWII in which women are not only able to join the service, they're also eligible for the draft. The book follows 4 girls who enlist: Rio and her best friend Jenou, Frangie, and Rainy. Each has a different reason for joining up and the first half of Front Lines (Part 1: Volunteers and Draftees) is devoted to their decision to enlist and their training. The second half of the book (Part 2: War) follows the main characters as they are sent to the African front.

I thought Front Lines got off to a slow start and -- maybe this is a bit weird -- I was almost relieved because I had planned to send the book to my friend Tammy, thinking it would be a good choice to entertain her during medical treatment. We shared a mutual love of novels (and nonfiction) set during WWII. I don't know if she ever read alternate history; I've resisted alternate history, myself, but this particular historical tweak appealed to me. Fortunately, the pace improved and I got over my desire for it to be a book worth abandoning. By the end of Part 1, the characters had already grown a great deal and I was looking forward to seeing what would happen when they were shipped out.

The characters' stories eventually converge near the end of the book; and, there is some occasional narration from after the war. I don't recall whether the narrator's identity was ever made clear but I'm pretty sure it wasn't. That is, in fact, the only way in which the story could possibly be considered incomplete. Front Lines is the first in a series but it stands alone fine. I'm picky about series books; if they end on a cliffhanger, I don't read on. Front Lines has a satisfying ending and I'm looking forward to the next in the series.

Recommended - A slow beginning nicely sets the stage before the pace picks up. Excellent character development and some pretty exciting action make Front Lines a winner. I thought the author also did a very good job of imagining what kind of challenges women might have faced if they'd been in the military during WWII.

My only issues with Front Lines involved the heavy repetition of two words: "wry" and "fug" or "fugging". There were way too many wry smiles. "Fug" in its forms was used as a replacement for the more offensive f-word and occasionally it just felt wrong. For example, there's a time that someone shouts, "Ren, get the fug out." During that time period, "Get the hell out," would have been considered much stronger language than it is, now, and it just sounds better. There's a pretty extensive bibliography, so I was surprised and irritated by the author's decision to use a watered-down version of one curse word and overlook the fact that there were other swear words that were equally offensive in the 1940s but now are considered so mild that their use in YA would be considered comparatively clean, today.

Yeah, picky, picky. Sometimes little things get under your skin and those two word choices and their overuse really did get on my nerves. But, the book is a good one; a few annoying words were not enough to put me off. I especially appreciated the fact that one of the characters was a black girl from Tulsa, so there are references to Tulsa's race riot, a historical event that has not gotten the attention it should.


©2016 Nancy Horner. All rights reserved. If you are reading this post at a site other than Bookfoolery  or its RSS feed, you are reading a stolen feed. Email bookfoolery@gmail.com for written permission to reproduce text or photos.
Posted by Bookfool at 5:43 PM