Everything She Forgot by Lisa Ballantyne and a Fiona Friday pic 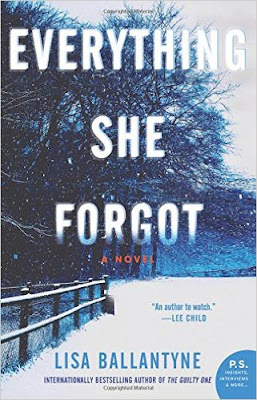 Margaret Holloway is headed home from work on a snowy night when she's caught in the worst automobile pile-up in London history. Saved from a fiery death by a mysterious man who has clearly been burned in the past, Margaret is uninjured but shaken. In the days after her accident, she becomes even more uncomfortable as buried memories begin to surface. What happened to Margaret that was so traumatic she suppressed it?

Margaret's storyline takes place in 2013 and there's a second storyline in 1985 (plus a third involving a journalist, also in 1985). George was madly in love and asked his girlfriend to marry him but her family prevented their marriage, even after the birth of their child. In 1985, still longing for his beloved and wishing to see his child, George steals some money and goes to find Kathleen. Maybe now she will reconsider. He can whisk her away with young Moll, far away from his family and the dangers. But, things go very, very wrong.

Recommended - Everything She Forgot is suspenseful, if a bit predictable. In spite of its minor flaws, I gave it 5 stars, probably partly because of the fact that the book is set in the United Kingdom but also definitely because I was craving a fast-paced read and it was simply the right book for the moment. I particularly recommend Everything She Forgot to those who like a bit of suspense but don't mind if some of the plot points are a bit transparent. I didn't mind that at all.

On to Fiona Friday: 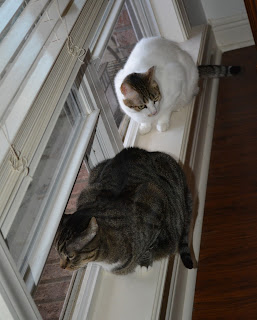 After three days of gradually re-introducing the cats, they've gone from a mere five minutes of harmony to nearly three hours. Progress! I cannot wait until they can be around each other all the time, again. I'm so exhausted from the banging and howling (by whoever is stuck outside the master bedroom at night) that it's getting hard to function like a normal human. Fingers crossed they'll be interacting normally within a week or so. Not sure how much longer I can stand the sleep deprivation.

©2016 Nancy Horner. All rights reserved. If you are reading this post at a site other than Bookfoolery  or its RSS feed, you are reading a stolen feed. Email bookfoolery@gmail.com for written permission to reproduce text or photos.
Posted by Bookfool at 5:36 PM