I've just checked my local public broadcasting schedule to confirm that the encore showing of "The Abominable Bride" -- the latest Sherlock episode -- is scheduled to air tonight, which gave me the nudge I needed to finally photograph Sherlock: Chronicles. 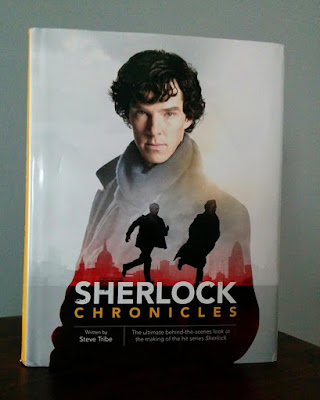 Sherlock:: Chronicles by Steve Tribe describes the creation of the Sherlock TV series from a germ of an idea tossed around randomly to development, editing and final production. A chapter is devoted to each of the episodes in the first three seasons along with a foreword by Mark Gatiss (who plays Mycroft and is co-creator of the series with Steven Moffat) and a great deal of background material about older versions of Sherlock Holmes that influenced the modern series, creative decisions like the choice to use a contemporary setting, the casting of the show, wardrobe and sets . . . even the styling of Benedict Cumberbatch's hair.

I've been flipping through the book and I can't find the hair bit but I recall Cumberbatch referring to the chosen hairstyle as "this mop" or something similar, which made me laugh. To be honest, the hair is the only thing I dislike about Sherlock's characterization. I'm rather fond of the star's shorter, natural auburn hair. Apparently, I'm in the minority in that regard.

Sherlock: Chronicles is crammed with gorgeous photographs of the actors (behind-the-scenes and official release photos), the sets, side-by-side comparisons of original A. Conan Doyle stories and the scripts that drew from those stories, lists of selected roles key actors have played, deleted scenes, images of art, special effects  (including the creation of the terrifying hound in the updated version of "The Hounds of Baskerville", on-screen texts, and the mattress that meets Sherlock halfway when he's drugged) and storyboards. There are some collages of photos but none of the photos were so painfully small that I had to pull out a magnifying glass. The layout is very nicely done.

Some of the things I enjoyed learning:


I spent a good two months working my way through Sherlock: Chronicles and then viewing each episode as I read about it, which was tremendously fun. Just before I began reading the book, we spent 9 days in London, in a flat on Baker Street, and discovered that we had sat in the park where John Watson's friend told him about an acquaintance looking for a flatmate and stood watching skateboarders in a South Bank setting covered with graffiti that Sherlock and John walked past in another episode.

Highly recommended - If you're a fan of Sherlock, Sherlock: Chronicles is an exceptionally fun read and an excellent reference. At 8" x 10", the book is large enough that photos are nicely sized (some of the text in side-by-side comparisons of story vs. script, emails, and lists of other roles played by key actors are quite small, though). It would look nice on a coffee table and would make a great gift for the Sherlock lover in your life. I especially enjoyed the fact that the reading opened up a few delightful discussions with the spouse. He enjoyed learning those little background tidbits as much as I did.

My thanks to Dey Street Books for the opportunity to review Sherlock: Chronicles.

©2016 Nancy Horner. All rights reserved. If you are reading this post at a site other than Bookfoolery  or its RSS feed, you are reading a stolen feed. Email bookfoolery@gmail.com for written permission to reproduce text or photos.
Posted by Bookfool at 4:21 PM