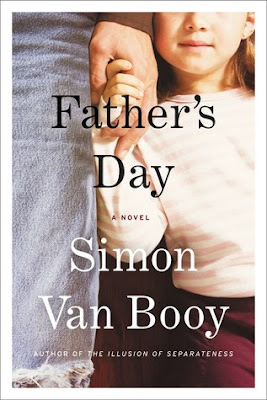 This is going to be one of those rare occasions that I post part of the cover blurb because I think it's fairly well-written without spoiling anything:

At the age of six, a little girl named Harvey learns that her parents have died in a car accident. As she struggles to understand, a kindly social worker named Wanda introduces her to her only living relative: her uncle Jason, a disabled felon with a violent past and a criminal record. Despite his limitations -- and his resistance -- Wanda follows a hunch and cajoles Jason into becoming her legal guardian, convinced that each may be the other's last chance.

Moving between past and present, Father's Day weaves together the story of Harvey's childhood and her life as a young woman in Paris as she awaits her uncle's arrival for a Father's Day visit. To mark the occasion, Harvey has planned a series of gifts for Jason -- all leading to a revelation she believes will only deepen their bond.

You can listen to the first five minutes of Father's Day read by Bronson Pinchot, here.

Before I opened the book, Simon shared (with two of us planning to read Father's Day soon) a helpful tip via Twitter: "Just remember the language reflects the syntax and vernacular of the characters." You can hear the unusually childlike narration if you click through to the excerpt; and, it quickly becomes apparent why he mentioned syntax and vernacular. Although the prose sounds very much like Simon's other writing, it is definitely simplified -- slightly more clipped and not so heavy in metaphor. But, the reflective moments I love in Simon's writing weren't wholly absent:

He remembered when they were young and walked to school along Kissena Boulevard. Jason used to hold his brother's hand. He considered how memories hold our lives in place but weigh nothing and cannot be seen or touched.

~p. 50 of ARC (some changes may be made to the final print version)

My feelings about Father's Day are, admittedly, mixed. I recognize Simon's writing easily; if you handed me the book without a cover or an author name anywhere in it, I'm certain I'd recognize the writing as Simon's. There's a rhythm and weight to Simon's writing that's uniquely his and I love it. There's also the same lovely mix of hardship and uplifting moments, empathy for his characters, and the quivering undercurrent that trembles through all of his books . . . love, it says, is everything. I adore that about his writing, how it focuses on the small moments that show how important it is to care for our fellow humans.

Having said that, there were things that I didn't love about Father's Day. Jason was a hard character to like. Years later, visiting his daughter in Paris (she does not ever refer to him as her uncle, even in the early days), he has conquered many of his demons but he still has a sharp temper that he has to work hard to control. He's a man with a tendency to violence and, at one time, dissipation. Again, though, there is the undercurrent that tells you love can change a man; love can make someone work to be a better person. And, Jason does exactly that. There's even a little surprise that has to do with the reason he was sent to prison. I liked the way the author managed to sneak in that little surprise.

Recommended but not a favorite - I missed the complexity of Simon's other books and had more trouble getting into Father's Day than expected. My inability to focus, this year, may at least be partly to blame but I'm pretty sure it was not the only factor. I also was not even slightly surprised by Harvey's disclosure, toward the end of the book. And, yet, I enjoyed Father's Day for the usual reminder of how love can change a life, give a person hope, encourage him to change for the better. The blend of "loss and transcendence" (from the last paragraph of the cover blurb, which I didn't share) is something you can always bank on from Simon. There is a bit more darkness, fewer characters, a more simplistic storyline, but the pages of Father's Day resound with that same beautiful theme of love and light breaking through the darkness.


©2016 Nancy Horner. All rights reserved. If you are reading this post at a site other than Bookfoolery  or its RSS feed, you are reading a stolen feed. Email bookfoolery@gmail.com for written permission to reproduce text or photos.
Posted by Bookfool at 1:12 PM