The Summer of Me by Angela Benson 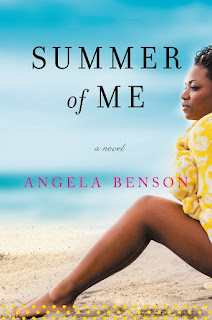 Destiny is a single mother with twins. Her ex, Kenneth, is a good father to the children but he has hinted at trying to get custody. His financial situation is much better than Destiny's and he lives in a better school district in greater Atlanta. To prevent losing custody of the children and keep from having to drive them all the way across town to attend school in Kenneth's district, Destiny has decided she must save up the money to move to his area. She's found an affordable house and located a job. But, the job has fallen through at the last minute and she needs ideas.

Destiny's friend Bertice has been known to get involved in shady opportunities but when Kenneth takes the children for the summer and unexpectedly cuts Destiny's child support payments in half, Destiny is desperate. Now, she won't be able to pay her bills, much less buy a house. Ignoring the feeling that something isn't quite right, she signs up with the company Bertice has been working for, writing product reviews.

Meanwhile, Destiny's mother has been pushing her to go back to school and Destiny finally gives in, while her other best friend has introduced Destiny to a charming widower and associate pastor who needs help with a program distributing his wife's insurance money to those in need. Destiny signs on to help. The money isn't great, but she's definitely interested in Daniel.

Between her job at a cosmetics counter, styling hair in her basement, helping Daniel plan a grant program and financial planning courses, and the new job writing consumer reviews, along with night school, you'd think Destiny wouldn't have time to eat or sleep. But, somehow she manages not only to date the preacher but balance everything else and go for a weekend trip to California to see the kids. She also meets a woman who takes an unusual interest in her and offers to help her get her license as a hair stylist.

So much happening! I could maybe buy into about half of what's going on in The Summer of Me all at once, but there were too many implausibles and here is where the spoilers come in. Highlight to view the spoilers, all of which I consider some of the "implausibles":

Destiny is involved in money laundering without realizing it, her mother has a secret that doesn't seem plausible (I won't go into why, but think "legal aspect"), and when Destiny's money laundering job leads to disaster, everyone involved gets off without consequences.

Another implausible, less spoilery, is the fact that Destiny's able to take a few extra days off from work and school when things go wrong while she's in California. And, you have to wonder, "How does a woman struggling to make enough money to buy a house find the funds to buy a round-trip airline ticket?" I also had difficulty with the fact that Destiny kept referring to the house she planned to buy as if it were just sitting there waiting for her to buy it -- no other buyers, no hounding from the real estate agent, no figuring out how to come up with a down payment and qualify for a loan, etc.

Add to all that the fact that the dialogue is stilted and I can't believe I finished The Summer of Me at all. But, I did and it served as the mental break I needed after Sylvia Plath's depressing novel. I also really love the fact that The Summer of Me is, at its heart, the story of a single mother doing her best to improve herself as a person and the lives of her children, as well as a clean romance. In those regards, The Summer of Me served its purpose. There is an epilogue and things work out in the end -- too easily, yes, and very implausibly. But, there's plenty of food for thought about how difficult it must be to be a single mother, particularly if you don't have a decent relationship with the father of your children or a nice support network of friends and relatives. Destiny had all that but was still struggling.

Recommended to romance fans, but with hesitation - I gave The Summer of Me an average rating because there were too many questionable threads and the dialogue didn't work for me, but it's a light, breezy read that I think romance fans (at least those who don't mind so much going on) will likely tolerate better than I did. Having said that -- and I do think my review sounds highly critical -- I have to add that I appreciate the book for helping me rise from post-Plath gloom.

I'm not sure if the image above is the final cover image, but I hope so. I have an ARC from HarperCollins and the cover of the ARC appeared white-washed, while this one clearly shows the fact that the protagonist is African-American. I requested the book specifically because I want to read more books by and about people of color and I'm concerned when I see a cover that's deliberately white-washed, although a part of me understands the reasoning -- that some people simply will not buy a book with a person of color on the cover. It's a problem worth talking about.

©2016 Nancy Horner. All rights reserved. If you are reading this post at a site other than Bookfoolery  or its RSS feed, you are reading a stolen feed. Email bookfoolery@gmail.com for written permission to reproduce text or photos.
Posted by Bookfool at 12:18 PM

Email ThisBlogThis!Share to TwitterShare to FacebookShare to Pinterest
Labels: a touch of romance, Angela Benson, recommended for a specific crowd, recommended with hesitation