Wave to my friend Charlie. We think he's a little weird but we love him. He's here because it seemed apropos to put a weird guy sculpted from forks and spoons and other things at the top of a post about weird books. 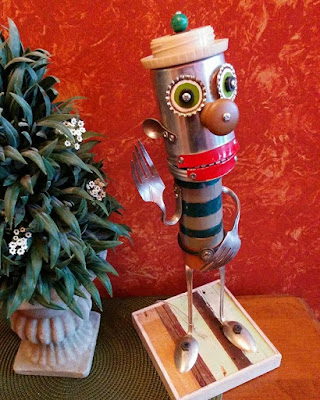 I read 4 books that I considered suitably weird. Most were serendipitous readings. I'll tell you a little about them and, if I've already posted a review, you can click through the link via the title of each book to read more.

Other Voices, Other Rooms by Truman Capote - The weirdness of this Southern Gothic by a young Truman Capote lies mostly in its characterization. But, there are some hazy, fever-dream type scenes in which you don't quite know what's going on till the scene has ended. At least, I didn't. One of the people in my book group called the death of a mule the "mule suicide scene" and the rest of us said, "He didn't really commit suicide exactly," which he acknowledged but now I'll probably forever think of that mule as suicidal. This one's great if you're into the Southern brand of weirdness.

Like Water for Chocolate by Laura Esquivel - (Same link as Other Voices, Other Rooms) This is really the only book I deliberately chose for its weirdness and I chose it because a number of people either recommended it or said, "Yes, yes, that one!" to those recommendations. Wowee, were you guys right. What an odd mix of cooking, magic, and love. I think what I most adored about the complete and total weirdness of Like Water for Chocolate is that it was so utterly unpredictable. I had no idea where Laura Esquivel was going to take me from one page to the next. A truly, uniquely strange book that I'm happy to have finally read. A friend told me the book reminded her of an aunt who would tell family legends while she was cooking. I confess to being envious of her lovely cooking history. My early cooking experience was all "Chop this up and then get out of my way," hence the husband who does the bulk of the cooking in this house.

Pines by Blake Crouch - I didn't know this book was going to be so bizarre; again, it was pure luck that my very first inter-library loan (!!!) was freaky as all get out. What's strange about Pines is both the setting and the characters. A secret service agent wakes up to find himself beat up, most of his memory gone. The people in the town of Wayward Pines, though, are shifty and he's unable to get any answers out of anyone. There are little clues to what's going on (like a cricket that isn't really there) but I would never, ever have guessed the secret of Wayward Pines and what really happened to Agent Burke. It's crazy. But, I'm not going to give it away, in case you decide to read it. Must not spoil.

Nimona by Noelle Stevenson - I don't think I'm going to bother writing a full review of Nimona (a graphic novel that I read electronically -- finally, I've found something I actually like reading in e-book form!!) but I enjoyed it. "Nimona" is the name of a shapeshifter who decides she wants to be the sidekick for the town's evil bad guy. But, he's really not all that bad and has trouble convincing Nimona she doesn't need to go around killing people. You can do your dastardly deeds without shedding blood. The real baddie is, in fact, the corporation. And, the bad guy is fighting the corporation, so doesn't that make him good? Eh, who knows. A wacky blend of medieval, modern, and paranormal, Nimona is lighthearted and fun and bloody and weird. The good guy is named Sir Goldenloin. I can't recall the bad guy's name. Something black something. At any rate, I liked it.

The rest of my #Weirdathon stack is still sitting on a corner of the entertainment center and I think I'll just leave it there. I had so much fun adding a little weirdness to my reading that I'd like to try to read more weird books, soon. Maybe not this month, but hopefully I can squeeze at least one title into May.

My thanks to Julianne of Outlandish Lit for hosting the #Weirdathon. Mixing a bit of weirdness into my reading really seemed to punch a hole in this year's annoying reading slump. Much appreciated!

©2016 Nancy Horner. All rights reserved. If you are reading this post at a site other than Bookfoolery  or its RSS feed, you are reading a stolen feed. Email bookfoolery@gmail.com for written permission to reproduce text or photos.
Posted by Bookfool at 7:32 AM