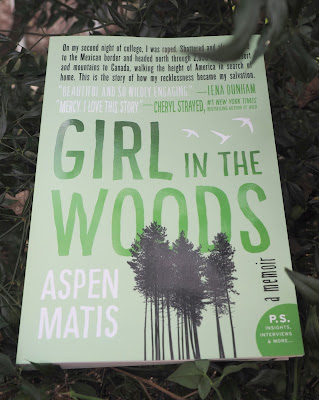 Yes, it's true that I posed Girl in the Woods in the middle of a nandina in my yard (and then came inside scratching).

I just finished Girl in the Woods by Aspen Matis, last night, and immediately thought, "I've got to write about this, right now," because I'm at the point that I've read so many books in such a short time span that I'm beginning to have trouble keeping them all straight. So, I may work my way backwards for a bit.

Girl in the Woods is the memoir of a young lady who was raped on her second night of college and how she eventually walked the entire 2,650-mile Pacific Crest Trail from Mexico to Canada. In her words:

I was on a grand walk hoping to discover my best path forward, my strength, my place in a frightening world.

I mentioned the rape up front because it's the central issue and when she mentioned she'd been raped to people, early on, she was blown off or told it was her fault -- a common theme amongst friends who've been raped and certainly in news stories. So, let's just acknowledge it here and now: the author was the victim of a crime, a violation, and she did nothing to deserve it, despite what the world told her. Her family did a lot of hiking and Aspen had hiked part of the Pacific Crest Trail before college, so it was only natural that the trail was the place to which she retreated to do her pondering.

A little background, though, is important. Aspen had an unusual (maybe "weird" is a better word) upbringing in that her mother didn't want to let Aspen, then known as Debby, grow up. To that end, she coddled her all the way through high school. Aspen was so over-protected that she didn't know how to dress herself or brush her own hair. That's hard to fathom but I know some people find it difficult to believe that one can go off to college not knowing how to do laundry and there were plenty of us who learned by turning white clothing other colors because we hadn't learned to sort.

In other words, it's important to work at not being judgmental when you read Aspen's story because her experience and her lack of ability to cope was not her fault. And, more importantly, it was not her fault that she was raped.

The vast majority of the book focuses on the hike up the Pacific Crest Trail, her sexual experiences and friendships, the dangers she faced and the trail magic and trail angels that saved her from herself. There's a nice photo section in the middle of the book with pictures of Aspen, her childhood paintings, scenery on the trail, gallon bottles of water that saved her when she walked one stretch completely unprepared, and the man she met toward the end of the trail (whom she married). I think the most important thing that you get out of the book is that when a person is traumatized, sometimes it's important for her to find her own way through the pain. Her family considered her selfish and she was often reckless but she got out of the experience what she needed.

Even more important is the distinction between rape and consent, which is clearly show through her experiences. She did a lot of testing - getting close to men and then saying no to prove to herself that she really was not responsible for a rapist's refusal to stop when she told him to, that it was possible for her to have control over her own body.

You do have to wade through a lot of verbiage to get to the point, though. Much as I appreciated the importance of Aspen's memoir, I found it a bit overwrought and tiresome. And, yet, I wanted to know the answers. What would walking over 2,600 miles do for her? Would she emerge unscathed or injure herself in the process (it's a dangerous walk, in many ways)? Would she find strength in the accomplishment alone or need to keep testing men and constantly trying to convince herself that she was beautiful, talented, in control?

Iffy on recommendation - As important as I believe personal accounts like Aspen's are, I must be honest and tell you that I found the author's wordiness and constant fretting about whether or not she was pretty enough, talented enough, etc., wearying. It's a bit self-indulgent, in other words, always a danger with memoirs, although I know some people don't mind that as much as I do. I personally think a full 100 pages could have been cut from the book. Having said that, I think the importance of the book lies in how clearly is shows the distinction between a violent crime and the way sex ought to be. And, you also have to admire the author for daring to take on such a huge challenge when she had been so fiercely protected for so long. That can't have been easy, even if hiking was something she'd always found comfortable.

On to Fiona Friday, a picture of Fiona gazing out into the wilds of our backyard: 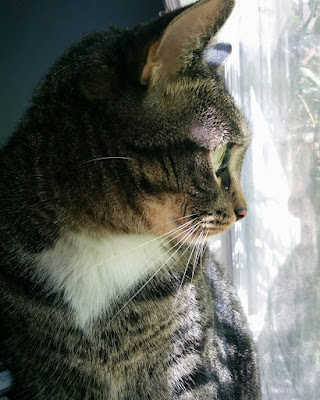 ©2016 Nancy Horner. All rights reserved. If you are reading this post at a site other than Bookfoolery  or its RSS feed, you are reading a stolen feed. Email bookfoolery@gmail.com for written permission to reproduce text or photos.
Posted by Bookfool at 2:08 PM