I was busy yesterday, so you get Tuesday Twaddle, this week. Malarkey will return, next Monday. 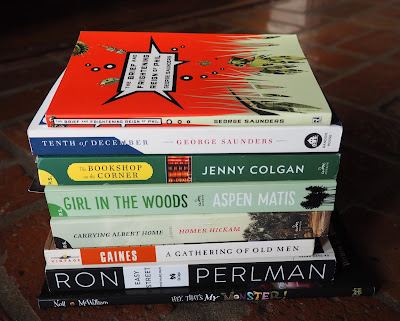 
I've been craving a reread of Tenth of December but didn't own a copy, so I decided to go ahead and buy my own and looked up George Saunders' other books, while I was at it. Confession: The cover of The Brief and Frightening Reign of Phil was irresistible. I want to frame it. In fact, I wish the Tenth of December cover happened to be equally outlandish; the contents are certainly wacky enough to deserve a cover in the same vein.

I also bought a copy of A Gathering of Old Men, my F2F group's November selection. Easy Street by Ron Perlman is one of those rare memoirs by a famous person that has actually gotten stellar reviews. I would not probably know about it if not for the fact that Ron Perlman followed me on Twitter, a couple years ago. I followed him back and decided he must have followed me because I'm a book blogger, so I was actually quite surprised when nobody contacted me about reviewing his book (although I admit to never checking my spam file, so maybe someone did and the request was tossed out). I've watched the reviews and they've all been so positive that I finally decided I might as well go ahead and buy a copy.


What a fantastic reading week! I finally decided it was time to buckle under and finish A Square Meal. It was a fun book to drag out because I enjoyed it so much and learned a great deal about how people ate, early in the 20th Century, but it was time to move on. Hey, That's My Monster! is a picture book, so I've already read it twice. It's loads of fun. Commonwealth is my first Ann Patchett and definitely won't be my last. What an amazing writer she is! I should definitely not have put off reading Patchett. Maybe a Fox is a children's book I bought at the local book festival and it was very good but so deeply sad that I'll have to think about whether or not I want to take the time to review it. Hmm, probably. We shall see. It really is a good story, even though it's a bit on the depressing side.


Clearly, I have been prone to start reading whatever walks in the door, lately, and that's fine. I'm happy with the mix I'm reading. and so very thrilled to be back to reading at a normal pace that I'm absolutely not going to kick myself around the room if I don't happen to read ARCs that have been waiting longer for my attention.


In other news, cats look adorable when they wash their faces: 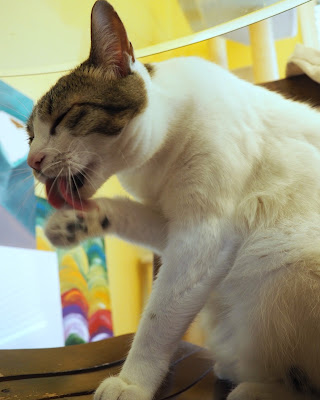 You probably knew that, right?

©2016 Nancy Horner. All rights reserved. If you are reading this post at a site other than Bookfoolery  or its RSS feed, you are reading a stolen feed. Email bookfoolery@gmail.com for written permission to reproduce text or photos.
Posted by Bookfool at 10:01 AM