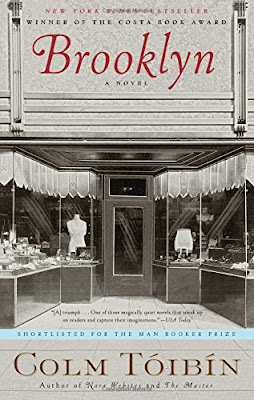 I'm going to keep the description fairly brief and dive right into talking about my book group's discussion of Brooklyn because it was a surprising discussion.

Brooklyn tells the story of Eilis, a young Irish woman with a talent for numbers. Eilis is skilled at bookkeeping and is offered a job in a small shop as a clerk. Her boss, Miss Kelly, has a system by which she keeps the best customers happy. She's strict and not a particularly nice person, but Eilis is happy to be employed. Then, a priest returns to her small village from America for a visit. He knows someone who could give Eilis a much better job with the opportunity for growth and offers to help her move to New York City. Eilis's brothers live in Liverpool and by encouraging Eilis to move to the U.S., her big sister Rose is basically sacrificing any chance she might have to marry and move away, herself. Eilis takes the opportunity to leave and gradually finds her way in life and love as a new American. But, will she be happy if she marries? And, when tragedy strikes, forcing Eilis to go home, will she ever return?

I made the mistake of assuming there wouldn't be much to talk about in F2F group because Brooklyn is such a quiet, understated book that focuses on interpersonal relationships and the everyday events through which Eilis transitions from Irish woman to immigrant worker and then becomes, without even realizing it, an American. Those small changes, though, turned out to be eminently worthy of discussion.

Among other things, we discussed:

This one's a potential spoiler, so I'll turn it white and you can highlight it if you're not worried about spoilers:


Wow, look at all that! There was so much to talk about. There was also a death that we discussed but I'm trying to avoid spoilers.

Some of us were aware that a movie version of Brooklyn has been made but none of us had viewed it, so there was no basis for comparison. We all did agree that we liked the book, though, and several people said they were going to look up the movie.

Recommended - I enjoyed the book, low-key as it was, and definitely recommend it. We didn't have a show of hands but there were really no negatives brought up so I think I can safely say everyone in my book group enjoyed Brooklyn and the discussion was a lively one. While I do recommend it for book group discussion, I'd advise printing out some topics to discuss. We were fine once we got going but there was a bit of twitchy shuffling before someone spoke up and got the conversation started.


©2016 Nancy Horner. All rights reserved. If you are reading this post at a site other than Bookfoolery  or its RSS feed, you are reading a stolen feed. Email bookfoolery@gmail.com for written permission to reproduce text or photos.
Posted by Bookfool at 5:23 PM