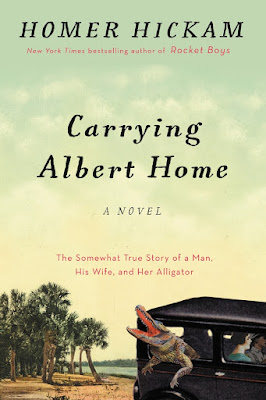 Carrying Albert Home by Homer Hickam is a tale that's based on a family legend, the story of a road trip once taken by Hickam's parents, who drove to Florida from their home in coal country to return their pet alligator to the swampy land he came from. Hickam confesses he doesn't know what's true and what's not, so he clearly just ran with the story and had a good time.

The book reads like a string of tall tales that are interwoven. Elsie is unhappy as the wife of a coal miner and spends a good bit of her time daydreaming about the romance that never was, with actor Buddy Ebsen. Buddy sent the couple a young alligator as a wedding gift and the alligator, Albert, has grown to four feet. He likes to have his belly rubbed and he has his own little pond but Homer (the elder Homer, father of the author) has had enough of Albert and gives Elsie an ultimatum: give up the alligator or lose me. This prompts the road trip to Florida after Elsie decides that her choice is Homer, not the alligator, but only if Albert is returned to Florida. Somehow, a chicken ends up traveling along with them.

I enjoyed Carrying Albert Home but I had several problems with the book. The first problem was the flatness of dialogue. Everyone -- and I do mean everyone -- sounded exactly the same to me. There was no variety from one character to another. The second problem was the book's length: I thought Carrying Albert Home dragged on far too long. Around page 300 of the 400-page book, I started to get sick of the story and just wanted to get the reading over with. Third, both John Steinbeck and Ernest Hemingway make appearances in the book. As if.

Recommended but not a favorite - I'm glad I stuck it out till the end but Carrying Albert Home was just a bit too fanciful for me. I had trouble suspending disbelief and I didn't fall in love with the characters. In the end, I felt like I had to fight my way through the final hundred pages. Having said that, I think if you like a wildly tall tale in which a young couple goes from one adventure to another, you might enjoy Carrying Albert Home. I found it an average read and can't recommend it enthusiastically, but it's worth mentioning that stuff happens. There's plenty of action, in other words, if the dialogue and characters don't get in your way.

©2016 Nancy Horner. All rights reserved. If you are reading this post at a site other than Bookfoolery  or its RSS feed, you are reading a stolen feed. Email bookfoolery@gmail.com for written permission to reproduce text or photos.
Posted by Bookfool at 2:37 PM

Email ThisBlogThis!Share to TwitterShare to FacebookShare to Pinterest
Labels: fiction based on a true story, Homer Hickam, recommended but not a favorite, William Morrow