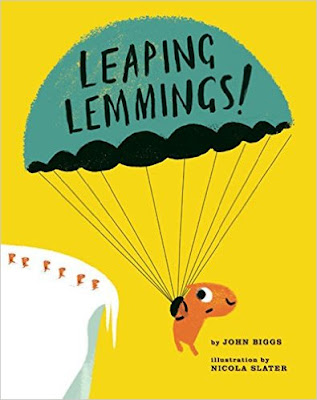 The opening spread of Leaping Lemmings asks the reader, "Can you tell these two lemmings apart? No? That's because all lemmings look alike, sound alike, and act alike." Two lemmings are facing each other and they look nearly identical but not quite. Four others are below the igloo the first two are standing upon, all of the four lemmings squeaking. But, then you meet a lemming who is different.

And, so forth. Clearly, this lemming is not like the others. He says he would not follow his lemming friends off a cliff. And, he calls himself "Larry". You can get a pretty good idea of how Larry stands out from this interior spread (click to enlarge): 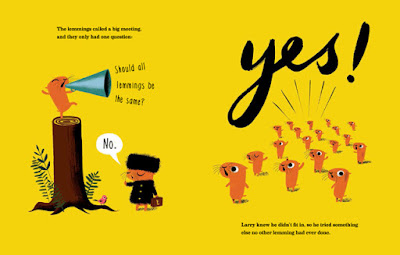 Because I'm an information junkie, I looked up lemmings to see if they really are, in fact, willing to follow each other off a cliff. Apparently not. The idea of lemmings being suicidal is based on a cartoon, not reality, although lemming populations have a tendency to rise precipitously and then drop significantly, which makes you wonder if they're lining up somewhere and committing mass suicide. The article I read indicated that there's really not a full understanding of the reasons lemming populations rise and fall so dramatically, but they do occasionally cross bodies of water to get to food, which can cause inadvertent mass drownings.

At any rate, Larry would probably not follow anyone across the water without a boat because Larry is  different, and deliberately. He doesn't want to be like everyone else. Eventually, Larry tries to break away from his lemming family, but he discovers that living with other creatures has its own discomforts (like living on a cliff if you're with the puffins) and he runs home just in time to save the lemmings from walking off a cliff, leading them instead to his home, where he feeds them pizza and they learn it's all right to be a little different. But, they're still mostly alike.

Highly recommended - I love the simplicity of the text and artwork in Leaping Lemmings, and the underlying theme that it's good to be different but you can still enjoy those who are like you, even if they're not so great at going against the flow. Larry is a pretty funny character and the lemmings are adorable. I like the text but I adore the minimalist illustrations, which are both fun and easy on the eyes.

©2016 Nancy Horner. All rights reserved. If you are reading this post at a site other than Bookfoolery  or its RSS feed, you are reading a stolen feed. Email bookfoolery@gmail.com for written permission to reproduce text or photos.
Posted by Bookfool at 8:47 AM