Just What Kind of Mother Are You? by Paula Daly 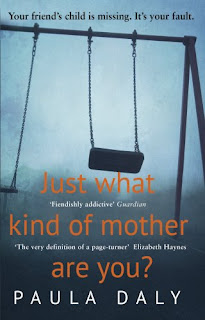 I just finished reading Just What Kind of Mother Are You? by Paula Daly, two nights ago, and since I keep falling behind on reviewing, I figure I should talk about it right now.

Just What Kind of Mother Are You? is about a woman who is a working mother of three, married to a taxi driver and living in England's Lake Country. She works at an animal shelter and is so overwhelmed that she finds herself frequently spacing out, particularly around the children. Lisa is thinking about the fact that she needs to be more attentive when her friend Kate calls and asks her a strange question: "How are the girls?" This throws Lisa, but it's not till later that anyone realizes her friend's daughter, Lucinda, is missing. Lisa feels responsible. Lucinda was supposed to have spent the night with Lisa's daughter, Sally, but Sally became ill and missed school. Nobody knows exactly when Lucinda disappeared but she should have been with Sally. Lisa didn't bother calling Kate to let her know Sally was ill.

Lucinda is the second 13-year-old to disappear in England. The first was half naked when she showed up, having been repeatedly raped. A known rapist is out there. Does he have Lucinda? When a third girl goes missing and Lucinda hasn't shown up, does that mean Lucinda is dead?

There are all sorts of little twists and turns to Just What Kind of Mother Are You? While I figured out a couple of the questions that the story posed before they were revealed, I found the book impossible to put down for long and raced through it. The ending, while predictable in some ways, was still utterly satisfying. Unfortunately, reading a single suspense novel did not manage to usher in cold weather as I'd hoped, although it has cooled off a little bit. So, I need to read a second suspense and cross my fingers that a real cold front will show up as I'm reading.

Highly recommended - I love a suspense that has so many little strands that it poses a lot of questions. Just What Kind of Mother Are You? was apparently Paula Daly's first book. If so, I'm impressed. It is very well-written with believable, very human characters and suspense that keeps going, right till the answers are revealed. It didn't even matter that I figured out a couple of the mysterious plot points because there was enough left hanging that I was still in suspense, even when I thought I knew what exactly was going on. Now, I'm wishing I had more of Daly's books sitting around. I may look to see if there are more titles I can order. I've enjoyed both of the books I read by Daly and I'm glad I saved Just What Kind of Mother Are You? for a time when I needed a slump-breaker.


©2016 Nancy Horner. All rights reserved. If you are reading this post at a site other than Bookfoolery  or its RSS feed, you are reading a stolen feed. Email bookfoolery@gmail.com for written permission to reproduce text or photos.
Posted by Bookfool at 12:39 PM